Most business books are boring. They either plod along, or string together perky anecdotes separated by “takeaways” that give readers sure-fire ways to achieve “success”, whatever that means.

My book, Ice Cream Social:  The Struggle for the Soul of Ben & Jerry’s is different. It’s more like a five-act tragicomedy where the hero rises, falls, and rises again. The characters are noble and flawed. They fail almost as often as they succeed, they do surprising things, and they finish their journeys stronger, sadder, and wiser.

The first act of the story is well known. Ben & Jerry’s Homemade Ice Cream begins as a storefront in Burlington, Vermont in 1978 operated by two 26-year-old best friends, Ben Cohen and Jerry Greenfield.

Their friend Jeff Furman, who is a few years older and has a law degree, helps them write their first business plan by taking a plan for a pizza restaurant and substituting the word “cone” whenever the plan used the word “slice.”

The business runs in the spirit of the counter-culture. Once a year, Ben and Jerry spend the day giving away free ice cream to anyone who asks for it, including dogs. 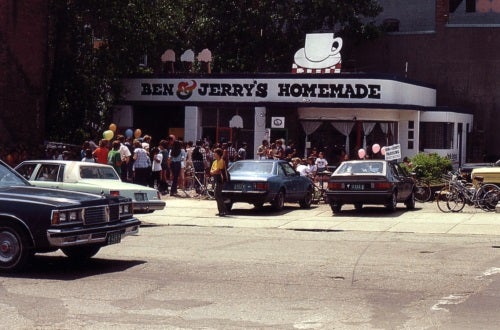 Ben & Jerry’s is a local business for its first six years, but as its sales grow, signs accumulate that something unusual is going on. An early poster for Free Cone Day features two quotes: “Business has a responsibility to give back to the community,” from Ben, and from Jerry,  “If it’s not fun, why do it?”

The second act, 1984 to 1993, is the happiest. Money is pouring in, and the company grows from $4m to $140m in annual sales. The media loves Ben & Jerry’s, and Ben and Jeff Furman lead the board and employees to embrace “linked prosperity”. 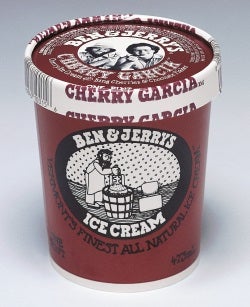 This is the idea that everyone and everything Ben & Jerry’s touches should benefit as the company’s profits grow. They are quite serious, and in the mid-1980s, Ben & Jerry’s starts spending lots of money it is not required to spend. Their pay and employee benefits are extremely generous.

They give away 7.5% of pre-tax profits to their charitable foundation. They look for ingredient suppliers who do good things, such as hiring hard-core unemployed people or helping tropical farmers. They begin reducing their environmental footprint.

These experiments do not always succeed, but when they do, Ben & Jerry’s is able to move their financial and social goals forward at the same time. The dynamic tension between profit and social purpose is what some call a double or a triple bottom line. Although it is hard to sustain, it gives the company its soul and attracts a lot of attention.

Act three, 1993 to 1999, is when the company loses its way, and act four, 2000 to 2008, is when they almost lose their soul. Rapid growth ends, costs rise, and competitive pressures split the board of directors into two factions: those who believe in a radical version of linked prosperity, and those who believe that profit must come first.

As the split deepens, employees embrace the idea of linked prosperity and spread it throughout the business, racking up one trailblazing success after another. But then the board succumbs to competitive pressures and threats from shareholders, a bidding war ensues, and the company is sold to Unilever.

Ben and Jerry leave the board of directors after the sale, in 2000. They are heartbroken and convinced they have failed. This is the darkest part of the story. It is so sad that several people who went through the sale choked up when I interviewed them.

And for eight years after the sale, Unilever manages the business in a normal way – which is to say, they get it all wrong.  The company is assigned to an unsympathetic manager who is focused on cost-cutting; the quality of the product declines, and social mission initiatives are directed away from difficult, long-term efforts and toward campaigns that will play well in the press.

If the story ended here, it would not be worth telling. But it does not end. The people who believe in linked prosperity keep trying.

Getting that Ben & Jerry mojo back 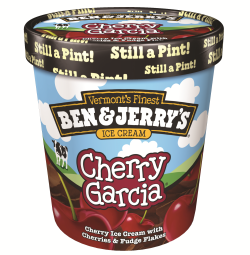 Ben and the rest of the board agree to sell the company only after Unilever makes several unusual concessions. The sale agreements allow Ben & Jerry’s to continue as a Vermont-chartered corporation with one shareholder.

That shareholder, Unilever, grants the company the right to maintain an independent board of directors, and nine of the 11 seats on the board are filled independently of Unilever.

The board exists forever and has specific, enforceable powers to preserve the social mission and protect product quality. Unilever has primary responsibility for the financial and operational aspects of the business. So Unilever does own Ben & Jerry’s, but they do not completely control it.

In the sale agreements, Unilever gives the independent board the right to veto changes in ingredients, new products, and all marketing materials. Unilever agrees to fund an independently audited annual report of Ben & Jerry’s social performance.

They give the independent board the lead role in designing Ben & Jerry’s social mission activities. They agree to spend significant sums on the social mission, to continue making generous contributions to the Ben & Jerry’s Foundation, to increase these budget lines as the company’s sales increase, and to keep these promises forever. They also agree to pay all Ben & Jerry’s employees a “living wage,” which is far higher than the state-mandated minimum wage. 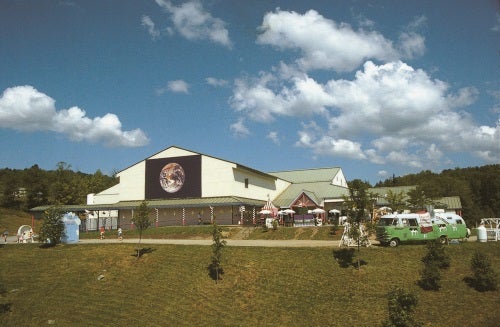 Although his friends are gone, Jeff Furman stays on the board after the sale because the agreement gives him the right to sue Unilever, at their expense, if they ever break this wage promise.

But the board is demoralised, and they do not stand up for these rights for several years. The last act of the story begins in 2008, when Jeff and other board members finally stand up to demand that Unilever take the sale agreements seriously.

After a year of tense negotiations, and significant changes in the Unilever management team, Ben & Jerry’s gets its groove back and starts to prosper as a bigger, more mature company.

The story has a happy ending, mostly. Annual sales have increased from $237m when the company was sold to over $500m today; the product is sold in 35 countries, and Ben & Jerry’s customers are unusually loyal and passionate.

Yet Jeff and other believers in linked prosperity have also learned things the hard way. They know that the struggle to maintain the creative tension between profit and purpose will never end. 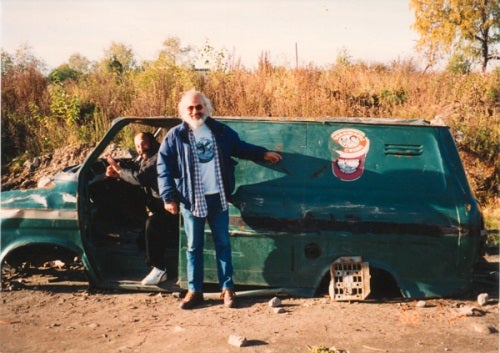 Jeff is 70 this year, and in his fourth year as chairman of the board of Ben & Jerry’s. He has spent half his life working for the company. He cooperated with me on this book because he knows his most important job is to pass the spirit of linked prosperity on to a new generation.

Ben, Jerry, Jeff, and their colleagues made mistakes as they built their business, but they never gave up on their belief that another world is possible. They found that maintaining a three-part mission takes constant effort when you are surrounded by businesses that focus on profits above everything else.

To succeed, you must persuade everyone in the organization to buy in and participate in the struggle. Because your expectations are higher, what looks like success to an outsider might feel like failure. And there will always be a temptation to take credit, pocket the money, and let things slide. That happened at Ben & Jerry’s more than once, and there’s no guarantee that it won’t happen again.

Brad Edmondson is an award-winning journalist and editor. He regularly posts new material about Ben & Jerry’s on his website and is collecting signatures to wish Ben Cohen a happy 63rd birthday for services to social enterprise. www.icecreamsocialbook.com.