Fresh from his success with LoveFilm – sold to Amazon for £200m in 2011 – Alex Chesterman partnered up with Simon Kain to launch Zoopla, a property website and app that provides a range of tools for both buyers and sellers.

Founded in 2007 and launched the following year, Zoopla began to grow quickly and didn’t stop. In July 2009, the company added Thinkproperty.com to its portfolio, with several other acquisitions following just a month later.

By 2012, Zoopla had added several more businesses and formed the Zoopla Property Group (ZPG). Two years later, the company went on to float on the London Stock Exchange.

Today, ZPG includes a range of brands and boasts some impressive figures. With 55 million monthly site visitors, plus 70% residential listing coverage, it continues to dominate the UK’s property market.

Why we chose Zoopla as one of the Startups 20

Aside from Zoopla’s staggering growth and success, the business also makes this list because of its disruptive presence in the UK’s property market.

As online business has evolved, Zoopla is just one company that has taken the large amounts of data that were out there and generated something meaningful, which users can actually get something from.

The Zoopla portal is designed to help users find the information they need. Buying a house is stressful, but Zoopla was created to make the process easier. And it’s fair to say that at its founding, it introduced a level of transparency into an industry that had been difficult to navigate in the past.

Before Zoopla, buyers and sellers had only one or two options to get the information they needed: speak to estate agents that knew the area, or commit themselves to long hours of research. Zoopla helped to cut through the noise.

Whether you want a cheap house that you develop and sell on or a family home with a pool and an annexe, Zoopla offered the filtering and the data to help. Providing granular and up-to-date information at your fingertips, buying and selling houses became a much less complicated process.

For us, any business that puts the power back in the hands of consumers is a winner, and Zoopla has led the charge in the property market. 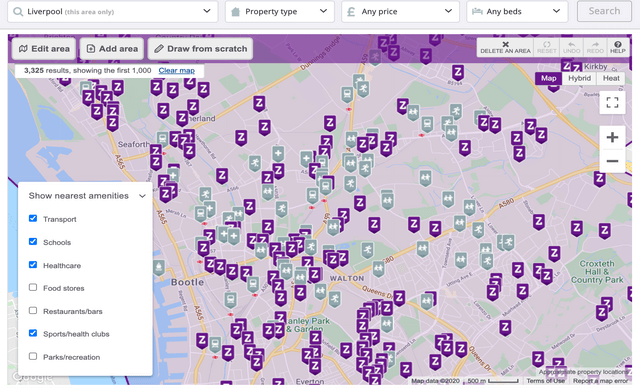 2020 has been an exciting year for Zoopla, despite the disruption caused by COVID-19. Even as many companies paused their own hiring activities, Zoopla continued at a rapid rate, focusing in particular on their Product and Tech teams as they look to offer an even better service in the future.

Outside of hiring, Zoopla has also been working hard to provide better value for their agents, along with the opportunities to grow their business. The introduction of their next-generation tool, Audience Builder, has increased new homes buyer audiences by up to 350%. The company also launched a partnership with iamsold, to help agents expand their services and commercial opportunities by selling properties via the Modern Method of Auction.

The future of the property market is likely to be changing on a regular basis. In 2020, barely a month has passed without some change to regulations that affect the ability to build, buy, or sell houses.

In 2021, it’s likely to be the same story. It’s clear, though, that Zoopla will be at the forefront of the industry for years to come.

When we spoke to Zoopla founder Alex Chesterman back in 2014, he highlighted a few different plans for the future. The one that stood out most then is still relevant today: Follow the consumer.

With a brand that puts user experience first, in a market where it seems like anything can happen, it will be interesting to see how Zoopla continues to serve its customers in 2021 and beyond.

When we spoke to Zoopla CMO, Gary Bramall, he had this to say about the brand’s long-term plans: ‘We believe we have a once in a lifetime opportunity to re-imagine how people find, buy, rent, and sell property in the UK. Key to this is helping people make intelligent home-buying decisions, leveraging data, analysis, and insight.’ Carry on the good work, Zoopla.