At just 22, Appear Here founder Ross Bailey is one of the youngest entrepreneurs on our 2014 index, but his place is more than deserved – since foundation in February 2013, his Startups 100-listed pop-up shop marketplace has seen truly phenomenal growth. Created after Bailey grew personally frustrated when trying to find short-term retail space, the site allows users to find space to let through an appealing combination of curated destination guides, video showcases and event sessions.

Bailey has tied up exclusive agreements with leading UK property owners, including British Land and Legal and General and Hammerson, which mean there are now over 500 prime retail spaces available on Appear Here. Its 5,000 clients now include Jamie Oliver, Moleskine and Google, and over 350 stores have been launched. In November 2013, Appear Here received £1m investment from the previous backers of Hailo, Trivago, Spotify and Pinterest. Bailey also marked a coup in March 2014, landing a deal with Transport for London to exclusively offer pop-up shop space to its customers in key underground stations. Barely out of his teens, we predict big things for Bailey in the future. 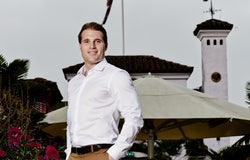