Moving into a shed might seem like a bit of an unusual, and drastic, step to take to launch a business but for me it gave me just the leg up that I needed to get my business, Pip & Nut, off the ground.

Pip & Nut is a food brand that’s launching a range of all-natural nut butters in the autumn.

It’s been just over a year in the planning and like a lot of start-ups it’s certainly been a challenging year with several hurdles to jump in order to get my product to market. But in the last couple of months the major blocks that I’d been facing tended to boil down to two main factors. Time and money.

So where does a shed come into all this I hear you ask?

Escaping the city to become a full-time entrepreneur

Well, in June, I won a competition run by Escape the City, a company who help talented individuals leave their unfulfilling corporate day jobs. The Escape the City founders decided to run the ‘Escape to the Shed’ competition after their own experience of needing to quit their day jobs, to give their company more time to grow, but at the same time still being reliant on their jobs to pay their London rent.

The ‘Escape to the Shed’ competition was an opportunity for them to help another start-up out by giving them three months free rent in the shed in central London (see pic) and desk space (at their HQ). 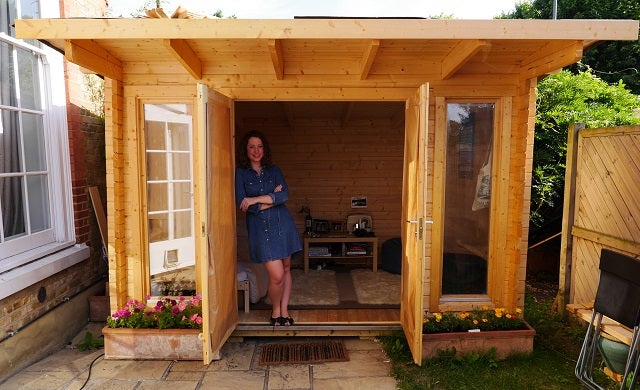 I was shortlisted to compete in a Facebook competition, alongside 12 other start-up companies, and after lobbying as hard as I could for two weeks to get as many ‘likes’ on the Pip & Nut page my business was announced as the winner.

Since winning Pip & Nut has moved forwards in leaps and bounds. It meant I could afford to quit my job, which I did just an hour after finding out I’d won, and go full-time on the business – enabling me to give it the time it fundamentally needed.

This competition is a classic example of how help comes in all sorts of guises. There are lots of alternative means to get your business up and running before looking for larger financial backing, it just takes a bit more creative thinking. I also believe that timing, and sometimes a little luck, can often play a huge role in the success of your business. Ask me a year ago if I’d be living in a shed about to launch my products into stores and I’d have said you were crazy.

But as crazy it may be it’s turned out to be a fantastic experience. The Escape the City team, now five years on since they launched their company, are an incredible bunch of people who have a whole host of lessons learnt which I’m able to tap into.

The benefits of surrounding yourself with other entrepreneurs

And I can’t stress enough how much I’ve benefitted by being surrounded by people who share your entrepreneurial spirit and support your business. And, strangely, now a month into my three month stint in the shed I’ve found I’m totally used to the four wooden walls that surround me.

As for the next two months it’s looking pretty busy. I’ve got the final bits of product development to finish, a Crowdcube funding round to secure and buyers to meet. I expect my time here will go by in a flash.

Analysis
What do small business owners want from Boris Johnson’s successor?
May 23, 2022
Blog
Parenting, the pandemic, and starting a small business: What’s it really like?
August 7, 2020