Tell us what your business does
We run a gourmet food business in London. We produce high quality Cali-Mex food to eat in or take out.

Where did the idea for your business come from?
The idea came mainly from our trips across America. Frank's catering background and Nick's previous experience at Innocent Smoothies were also large factors.

How did you know there was a market for it?
The cuisine is massive in the US, and there are one or two places popping up in the UK. ‘Fast-casual dining' is on the increase, but people are still cautious about price, however not so much that they will down trade to MacDonald's or KFC. (Nick did his LSE dissertation on the fast-casual food sector in London in summer 2009).

What's your USP (unique selling point)?
We focus on the premium end of the burrito market. This means quality food (all our meat is from British farms and cooked on site), excellent service and funky, original branding.

What were you doing before starting up?
We both met at Oxford. Frank worked for Goldman Sachs and Nick worked for KPMG, then Innocent and then did an MSc in management and econ at the LSE.

What planning did you do before you started up?
We spent a lot of time wandering around London sampling Mexican food. Nick wrote a 10,000 word dissertation on the fast-casual food industry in London, and we spoke to everyone we knew about restaurant start-ups. Frank's parents own and run restaurants.

How did you raise the money?
We put money in ourselves and raised further cash from private individuals by selling equity. We have no debt whatsoever. It wasn't too tough as we had honed our pitch and done our research but we did get a few rejections.

How did you find suppliers?
We made a lot of phone calls. Frank in particular spent a lot of time calling suppliers. We found that more suppliers end up coming to you once you have an established business. When starting up it's difficult to be heard as no one really takes you seriously.

What challenges have you faced and how have you overcome them?
We've had to be very organised, and occasionally use our house and bedrooms as a stock room (to the occasional annoyance of our housemates!) We've also learnt that a lot of things can be done very cheaply, if not free, for example: PR and advertising. Facebook, blogs and Twitter offer free ways of spreading the word.

Where is your business based?
It used to be based at home but now we have a small office. As the business is growing we just don't have the space or facilities to work at home.

How have you promoted your business? What has proved successful and what won't you do again?
Mainly by contacting people in publications, PR and advertising and telling them about us. We don't really have the budget for large PR stunts so we have to improvise. Nick went up on the Anthony Gormley exhibition on the fourth plinth of Trafalgar Square and built a giant burrito dressed in a poncho. That was entirely free but we had a lot of feedback.

How much do you charge? How did you decide this?
We charge slightly above the average cost of a burrito. This is based on our cost of goods and staff which is higher than that of most others.

What has your growth been like?
Growth has been good, turnover has increased month on month since we started and we have been mostly profitable apart from a bad month in February. We're a little behind the business plan in terms of new locations, but above it in terms of predicted turnover.

What's the impact on your home life been like?
We both live together so it's a bit strange living and working with the same person non-stop. But we're good enough friends to make it work – Frank will go biking on the weekend and I'll go and play football so we do get a bit of time away from each other.

What would you say the greatest difficulty has been in starting up?
The learning process. Nothing can prepare you for the complexities of running your own business.

What was your first big breakthrough?
Finding our first property. Landlords can be very reluctant to rent out to inexperienced kids without a proven business model.

What would you do differently and what have you learnt?
Lots of things. For example, tighter stock control and better organisation.

What advice would you give to budding entrepreneurs?
Do your research and make sure you do the numbers. Don't just go in headstrong on a hunch, but once you do decide to go for it, don't let anyone deter you, because you will get laughed at from time to time.

Where do you want to be in five years' time? Do you have an exit plan?
Hopefully with some more Ponchos across the city and maybe even further. 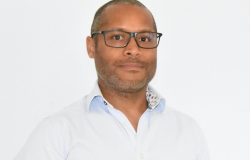 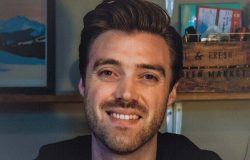 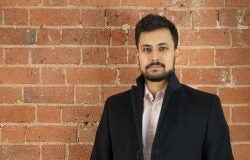 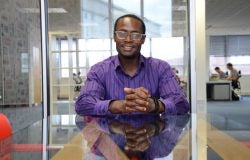 Just Started profiles
Un Office Space: Alex Molokwu
July 29, 2021
Back to Top
We use cookies. By browsing our site you agree to our use of cookies.