In second place is Gousto which, puns aside,  has a winning recipe for business success. Backed by over £9.1m funding from leading venture firms, the delivery box subscription service has become one of the market leaders in a highly-competitive sector with multi-million revenues and a team of 80 employees.

Founded by 2014 Young Guns Timo Schmidt and James Carter, Gousto’s concept is a simple one – the site enables you to choose weekly recipes you like the look of and then sends you the ingredients in exact portions, alongside recipe cards, so that you can cook “like the Fonz of food”.

The service has rapidly become a firm favourite with foodies and those lacking the time to cook properly and now has over 10,000 customers and a growing community of fans on social media; 14,000 on Facebook and over 10,000 on Twitter.

Featured in the top 20 of the Startups 100 2014 index, the recipe delivery start-up has continued to focus on improving its products and further innovation is underway having recently closed a £5m funding round led by Unilever Ventures.

While Schmidt and Carter reveal that sending fresh food all across the UK has been a “huge challenge”, the duo remain determined to execute their goal of disrupting the way people eat “for the better” and a second warehouse is also in the pipeline to support expansion.

The company’s ultimate ambition is to become recognised as a bona fide alternative to supermarkets – a vision which is becoming increasingly credible. 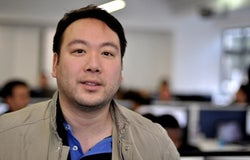