Frequent business flyer Rich Pleeth found himself constantly checking into Facebook when he arrived in a new city to see if friends were nearby, only to find they’d get back to him too late. Unlike other apps, which facilitate stalking, he wanted to create an experience that allowed people to see their friends more, “without the creep factor” of tracking.

Sup app does just that – the free app sends a notification to users when their friends are nearby, giving them the chance to meet and catch up. Targeting ‘hyperconnected’ 16-30-year-olds, the platform already has more than 15,000 users signed up. But how does it generate revenue? Sup app uses Facebook likes to send targeted push notifications, informing users of promotions available when they are nearby to a food or retail outlet they like.

To date, Sup app has raised £409,000 in funding with plans to raise an additional £700,000 in the coming months. On the back of this, the business expects to ramp up the number of users to one million. Pleeth has some stellar previous experience growing digital brands. He claims to have led Google Chrome’s rise to the number one browser globally and to have increased the market valuation of GetTaxi to $110m – a good omen for the future success of his latest venture. 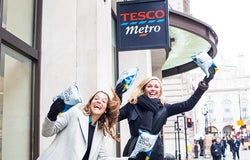