The idea of Deliveroo first popped into founder William Shu’s head when he was working 100 hour weeks for banking group Morgan Stanley.

He recognised that there was a need for a service that allowed you to order and have food delivered – fast.

But it would take another nine years for the technology required to start a tech company like Deliveroo to catch up, and it wasn’t until 2012 that Shu and co-founder Greg Orlowski finally had all the ingredients they needed to revolutionise the food delivery industry.

With Orlowski leading the tech team and Shu out there convincing big restaurant chains that a partnership with Deliveroo was the future of takeaway, the pair soon had a successful business model that was attracting investors from every direction.

It took two years for the team to expand throughout London, and then in January 2015 – just two years later – Deliveroo announced it had received $25m in Series B funding, allowing them to expand into Paris and Berlin.

Not long after, the pair were conquering the Middle East, Asia, and Australia. And by November 2015, Deliveroo was operating in over 50 towns and cities around the world. Fast forward five years later, and it now operates in over 500 of the world’s metropolitan hubs.

Why did we choose Deliveroo as one of the Startups 20?

Rarely does a company go from zero to unicorn in the space of eight years. In fact, thanks to the latest £450m investment from Amazon, the value of Deliveroo has rocketed past the minimum needed for unicorn status to an impressive $4bn.

Something that crops up time and time again in interviews with Shu is the fact that not only did he create a company to rival Just Eat – the market leaders at the time – but he left them still doing the prep work as he took Deliveroo straight to the pass.

And how did he do that? In an interview featured on Startups.co.uk two years ago, Shu recognised two of Just Eat’s fundamental flaws at the time:

“One, I didn’t recognise any of the restaurants that were listed; they were places like Chang’s Express or House of Kebabs, so obviously culinary masters. Secondly, I had no idea when the food was going to show up except that it generally took a long time. Although the ordering process was much easier, it was not a great customer experience.”

What we admire here is Shu’s ability to really understand the problem that his product needed to solve. Instead of hiding himself up in an office, Shu got himself a bike and started delivering orders himself – he wanted to know exactly what he needed to do to ensure his business would be a success.

Further collaboration with the charity in February 2020 saw 500 Deliveroo riders adorn the faces of missing people on their backpacks. In addition, drivers can sign up to receive a text notifying them when a child in their local area disappears. 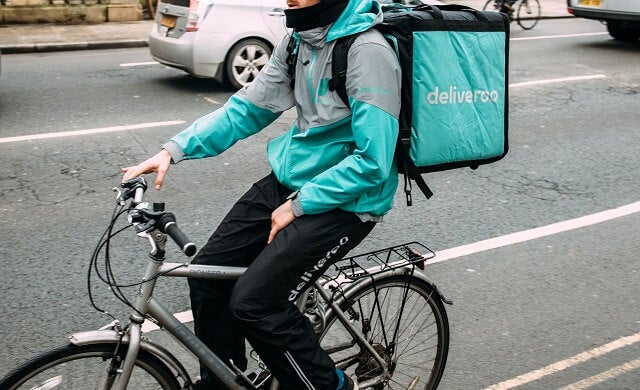 Deliveroo now delivers food from an impressive 80,000 restaurants around the world. It employs over 60,000 drivers, and before Covid-19, projected that its fleet of drivers would increase to 70,000 in 2020.

To really put Deliveroo’s success into context, a 2019 prediction featured in an independent study revealed that Deliveroo was set to support $4bn in projected output in its 14 markets in 2020 – however, again, due to Covid-19, this figure may not still stand.