“There must be a better way.”

It’s the thought that’s launched a thousand startups, and central to the ethos of every disruptor.

With TransferWise, this frustration was targeted at money transfer, and the whopping fees that banks charge for what, in the new millennium, is essentially just moving electrons around. So, two Estonians living in London – Kristo Kaarman and Taavet Hinrikus – set out to change that.

So, instead of using a bank to transfer money and being charged either a high fee or high exchange rate, they helped each other out. They googled the real exchange rate, and paid into each other’s accounts – one paid pounds into the other’s British account, while the other paid euros into his friend’s European account.

And this is what TransferWise does on a massive scale.

Of course, it helped that these two were better placed than most to make this dream a reality. Taavet was the first ever employee at Skype (which, if you didn’t know, was developed by Estonians and still has 44% of its employees in Estonia), while Kristo’s work as a management consultant meant he’d got a bit of experience with how financial institutions work.

Together, they built a clean, transparent platform that allowed people to send money all over the world for a low fee using the real exchange rate.

TransferWise launched in 2011. Since then, it’s attracted investment from the likes of Sir Richard Branson and PayPal co-founder Peter Thiel, been valued at $5bn, and helped over eight million companies and businesses in the last financial year.

Oh, and it’s made a profit four years in a row, which is not something you can say about too many fintech startups.

Why we chose TransferWise as one of the Startups 20

As you can probably tell, we’ve got a bit of a soft spot for TransferWise – it’s a great example of how far bravery, ingenuity, and hard work can get you. It’s also a definite David going against the Goliaths of the financial world, and ultimately, who doesn’t want to pay less to send money around the globe?

What we really like about TransferWise, though, is the way they go about things – they’re determined to develop a fair business that’s sustainable in the long term. That means investing in infrastructure, charging users the lowest fee possible, and not using any one group of customers to subsidise any other group.

Perhaps most importantly, they’ve always had an eye on profitability. Unlike some challenger banks, they haven’t run a loss-making enterprise that’s simply trying to sign up as many customers as possible – but they’ve had to make hard choices.

In the latest financial year for example, they had to initially increase their transfer fee from 0.65% to 0.68% of the amount transferred (compared to 7-8% for a high street bank), but were later able to reduce the fees charged for 76% of customers as they benefited from economies of scale, and passed those benefits on.

It’s a perfect example of a company that’s determined to act ethically and make a profit, and this mindset is deeply ingrained in TransferWise. 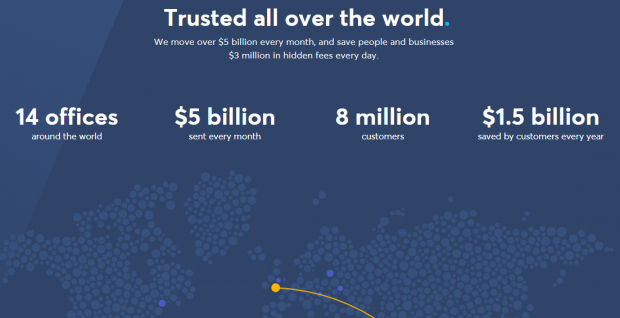 You probably won’t be too surprised to learn that TransferWise is doing rather well in 2020.

It processed a total volume of £67bn and sent £42bn across borders, meaning that £1 in every £25 sent by people around the world is sent via TransferWise.

It’s hugely impressive, but just a stepping stone to the company’s ultimate goal – that sending money around the world should be instant, convenient, transparent, and eventually, free.

There have been minor changes along the way – like partnership agreements signed with banks that want their customers to use TransferWise, and the launch of a business-focused product and borderless debit card – but for the most part, TransferWise is doing the same thing it’s been doing since it was born in 2011.

The big difference is that now, it’s really, really good at it.