Chris Sheldrick had been trying to solve a problem that he continually experienced during his 10 years of organising live music events.

From trying to get suppliers to site and bands to gigs, Sheldrick realised that standard addresses and GPS coordinates just couldn’t cut it – and the concept behind what3words was born.

Sheldrick teamed up with Jack Waley-Cohen, who prior to co-founding what3words in 2013, was the operations lead at Lingo24 – a translation company – and founder of QuizQuizQuiz, the largest quiz event business in the UK.

Together, they started what3words, a company that offers an alternative to traditional addressing systems. what3words is a free app, and it’s available offline too, which is important for areas with limited internet connection. But how does it work?

Squares. 57 trillion of them, to be precise. Each square measures 3m x 3m, and is labelled with an individual combination of three words from the dictionary, mapping the entire globe. For example, London’s Charing Cross Underground station is labelled as ‘vivid.sits.funds’.

This revolutionary idea has been backed by multiple investments. The total funding for 2014 reached $1.5m, and by 2017, what3words had raised more than $10m of investment.

And what3words' worth has extended beyond monetary value, too – within six months during 2019, it went from being used by six UK emergency services to 30.

Chris Sheldrick, co-founder at what3words, stated: “Our long term ambition is to become a global standard for location, meaning everyone can use a what3words address in any situation they need to.”

Why we chose what3words as one of the Startups 20

All kinds of humanitarian groups have used the service, in some truly remarkable ways. This has included locating disaster areas and managing rescue teams, creating solutions for addressing in refugee camps, and providing power and clean water after a natural disaster.

And what3words has even been used to save lives in emergencies – it's helped a rural accommodation business get medical assistance for a guest, and helped locate a walker who’d fallen while exploring a mountain.

For humanitarian groups that are looking to use the tool, what3words has an online video webinar so that organisations can see how other groups in their sector are using it. It also offers eligible NGOs the option to integrate the technology for free.

Along the way, what3words has also collected some seriously impressive stats. It’s available in 45+ languages, and is used in 193 countries each day. In fact, it’s been Apple’s App of the Day in 143 countries.

Perhaps unsurprisingly, then, what3words has also won its fair share of awards. Its accolades include being a Business in the Community 2017 winner, as well as being a finalist for the 2019 SXSW Interactive Innovation Award.

And with a strong social media community, including 36,000+ followers on Twitter and more than 40,000 Instagram followers, it’s evidently a hit with the average person on the street, too.

Startups.co.uk first reported on what3words during funding rounds in 2014. Two years later, the company’s achievements spoke for themselves, earning it a position on the 2016 Startups 100 index.

And the key to this success? Sheldrick commented: “First of all, we’re an unashamedly responsive company. Yes, we plan everything we do meticulously, but there’s always flexibility.

“Our approach is to be nimble, agile and constantly iterating: we double-down on things that go well, and stop things that don’t.

“Also key to our success is the partnerships with many innovative and forward-thinking businesses and organisations that believe in what we do, and have added our technology into their products in new and exciting ways.” 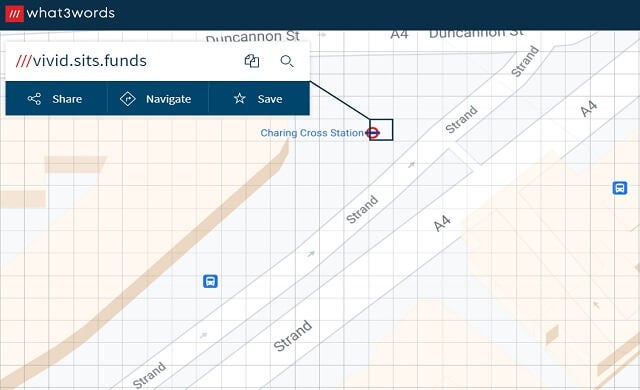 2020 has been a busy year for what3words. Continuing to serve as an invaluable resource for emergency services worldwide, teams in Austria, Canada, Germany, Mongolia, and Switzerland are all now using the service.

what3words has also proved useful during the pandemic. Indeed, the Czech Red Cross used it to help deliver meals to emergency services in the Czech Republic during the country’s Covid-19 lockdown.

It was also included in UK government advice for people leading a nomadic lifestyle, which suggested using the what3words app to contact the emergency services if needed. what3words addresses can also be used to find NHS Nightingale hospital entrances.

When asked about the impact of the pandemic, Sheldrick said: “We’ve been in a pretty unique position throughout the pandemic. On the one hand, a number of the ‌industries‌ ‌we‌ ‌work‌ with (automotive and travel especially) ‌have ‌slowed‌, but on the other, we’ve been able to have a really positive impact, helping with hospitals and the government response.

But what3words isn’t only helpful in an emergency: it can offer assistance on a daily basis as well.

And what3words also took another big step in the UK this year, launching its first nationwide TV campaign.

Looking further afield, what3words addresses have also been accepted by Careem, a taxi-hailing app in Saudi Arabia, while NAVITIME’s Japan Travel is the first navigation app in the country to use it.

As well as this, the what3words Voice API was launched in collaboration with Speechmatics, to offer voice recognition services. While what3words continues to provide easy to understand directions to precise locations worldwide, this represents its continued expansion into voice assisted technology.

When asked for thoughts on the future of the sector and startups in general, Sheldrick stated: “While I know a lot of businesses are struggling, it’s in the nature of successful startups to adapt, pivot, and solve problems.

“We’ve seen a lot of businesses switching up their models and offerings in response to the current situation, and I think we’ll see a lot more of that resilience, innovation, and creativity from UK startups over the next year or two.”