In July this year, the start-up raised £900,000 in an oversubscribed crowdfunding campaign – taking total investment to £1.3m – and the crowd showed their support once again.

Created on the principle that a good razor “doesn’t need to be complicated”, Cornerstone has perfected its goal of doing a small number of products well by selling all you need for the perfect shave,  including razor, gel, face scrub and post shave balm, which it then delivers straight to your door. This concept has seen it attract over 5,000 subscribers and counting.

The simplicity of its concept translates to the products it sells too. The start-up’s signature razor – blades engineered in Germany with a lightweight aluminium handle created in Britain – is all about keeping things simple and Bridge has said you “won’t find any space age ingredients”.

Having recently beaten Gillette and Wilkinson to win the title of ‘Best Razor’ at the 2015 Shortlist Grooming Awards, Cornerstone can now proudly add  the coveted title of Startups Awards People’s Champion to its awards cabinet.

Voted second by Startups.co.uk readers was desk space marketplace Hubble, with e-commerce start-up Flubit placing third out of the 60 finalists. 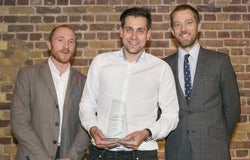