Innovative Business of the Year

Christopher Fagan has been a hustler all his life; he proudly recalls that he started selling makeup on Liverpool markets aged 13. His first-ever business loan came from his parents, and he returned the £500 to his dad within 24 hours (if only the rest of us could say the same about our own parental loans!)

Fagan credits his humble beginnings for the realisation that “money doesn’t buy talent.” This knowledge, he says, allows him to view the world in a pragmatic, businesslike manner, and allowed him to enter the energy industry without fear. Instead, he only saw the huge growth potential for his smart meter business.

Several years ago, Fagan clocked that the government’s ambitious plan to put a smart meter in every British home by 2020 would require the installation of 53 million devices in the next couple of years.

So, he joined forces with co-founder Lee Dickinson to create Access Install.  They calculated that, with a market share of only 1.9%, they could reap annual revenues of £140m.

Fagan and Dickinson decided to focus on attracting the business of smaller, newer energy suppliers, in order to beat competition from the other 22 licensed smart meter installers. Then they would strive to entice business from the ‘Big Six’ providers further down the line.

The trump card was customer service: Access Install does not charge for failed site visits (e.g. when the homeowner is not in or able to answer the door), thus eliminating the single biggest cost to energy suppliers.

Even after every home in Britain has been fitted with a smart meter, Access Install has big plans for the future, with plans to launch its very own energy supply company next year.

In Fagan’s own words ‘we have essentially built ourselves a business moat. From start to finish we do not depend on any other party’. This new venture places Access Install in an incredibly strong position leading up to the inevitable revolution of smart home technology.

The ingenuity of Access Install’s business model is a real game-changer within the energy supply market.

Its customer-centric ethos has driven the development of the company’s very own software, and this, coupled with sophisticated understanding of the market and anticipation future demand, makes Fagan and Dickinson a force to be reckoned with. 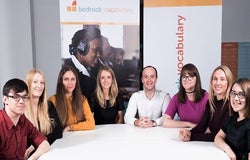