Start-ups from up and down the country entered in their droves and we can now reveal the finalists for the Startups Awards 2018 – a group of highly exceptional early-stage businesses set to become big names in years to come.

Whether they're inspiring through innovation, have raised millions in venture capital funding to scale, or are exceptional at exporting in new markets, there are a record 97 outstanding finalists for 2018.

Established in 2004, the Startups Awards seeks to unearth the UK's most creative, innovative and ambitious new businesses launched over the past four years.

Renowned for its ability to identify future business leaders, the Startups Awards is supported by headline sponsor The Start Up Loans Company, alongside sponsors AXA Business Insurance, haysmacintyre, GoDaddy, and Oracle NetSuite.

Also new for 2018, the Startups Awards has expanded its spotlight beyond the start-up market by adding two inaugural supporter categories.

These include accolades to recognise the work of Community Catalysts such as accelerators, incubators and co-work spaces helping start-ups go further, and an award for Growth Business Enablers; companies delivering key services to fast-scaling start-ups.

Finalists will now be judged by an expert panel of entrepreneurs and business leaders, including Mumsnet founder and CEO Justine Roberts, innocent drinks and JamJar Investments co-founder Jon Wright, and the co-founder of LOVEFiLM, Simon Franks.

The judging panel will decide the winners for each category and businesses deserving of highly commended and commended titles, alongside the overall winner; The Start Up Loans Company Start-up of the Year.

Renewable energy provider Bulb was crowned overall winner in 2017 and  has continued to see exceptional growth; recently topping the 2018 Startups 100 index of the UK’s 100 best start-ups.

Each of the finalists will also be competing for People’s Champion 2018, an award voted on by Startups.co.uk's business-owning readership and the public.

Shaving subscription service Cornerstone won the coveted title over three consecutive years but, with the business no longer eligible, the category is wide open for a new People’s Champion. People's Champion voting will open later this week.

The Startups Awards winners will be revealed at a prestigious awards ceremony hosted by the inimitable Oli Barrett MBE at the Royal Garden Hotel, London on 21 November.

Share your support for the Startups Awards 2018 on social media with the hashtag #StartupsAwards. 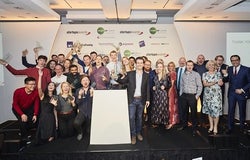