Andy McLoughlin and Alastair Mitchell's online collaboration tool Huddle was dubbed the next Google by BusinessWeek magazine. Backed for $5m by investors including Eden Ventures, Huddle allows users to work together online, share files, manage projects and organise virtual meetings in a secure and hosted environment.

Propelled by a number of key partnerships, including one with business network LinkedIn and another with video conferencing giant InterCall, this year's turnover is projected at £4m, up from £1.5m in 2008. McLoughlin and Mitchell are now taking their business global, setting their sights initially on the US market, where expansion is currently underway. The founders also run networking event Drink Tank, where members of the London tech scene meet to share ideas over a pint.

2012 update: Huddle has experienced explosive international growth since 2009 and is currently used by more than 80% of UK central government and over 100,000 organisations globally. The company has raised more than $40M in venture funding from top-tier US VC firms Matrix Partners, Jafco, DAG Ventures and In-Q-Tel (the venture arm of the CIA) and employs more than 150 people across London, San Francisco and New York.

As of August 2014, Huddle had secured 206 contracts through the G-Cloud programme. In early 2015, both co-founders stepped down from their roles – McLoughlin – who had already enjoyed a prolific career as an angel investor, backing 35 businesses including Secret Escapes – to join Silicon Valley venture capital firm SoftTech and Mitchell to become president and chief marketing officer of Huddle. Today, the collaboration tool operates from a dual headquarters in London and San Francisco, with former CEO of Mach Morten Brogger taking over as CEO. Huddle has raised more than $89.2m to from four different funding rounds. McLoughlin was awarded an OBE in the Queen’s Birthday Honours 2015 for services to UK business and technology leadership. 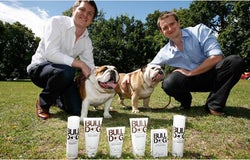