When former City banker Dessi Bell and her husband Malcolm launched Zaggora.com in 2011 even they could not have predicted the scale of its success – latest turnover figures have seen revenues break the £10m barrier. The company is known for its revolutionary HotPants™ which are made using ThermoFit technology fabric that harnesses body temperature, helping to burn more calories during exercise, maximising workout results. Just two years after launching, Zaggora looks set to become a major player in the fitnesswear industry – alongside a plethora of media and celebrity endorsements, the company continues to forge new retail partnerships in its largest market, the US, including high-end gym chain Equinox and American high street fixture Dick’s Sporting Goods.

Zaggora also has a growing presence in the UK – as well as strong ecommerce sales, a selection of pants are currently stocked in the iconic Kings Road Sporting Club and recently found their way into Selfridge’s flagship Oxford Street store, alongside household name brands such as Nike, Adidas and Sweaty Betty. Over 600,000 Zaggora products have been sold to customers in over 126 countries and just this month, the brand which boasts over 500,000 fans on Facebook, launched a much anticipated menswear line. 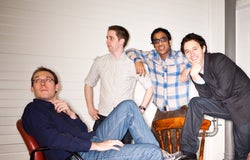