Jungle Creations, whose founder Jamie Bolding was named haysmacintyre Top Gun in 2017, has closed a £3m Series A funding round led by creative specialists Edge Investments.

John Smith, former COO of Burberry Group and CEO of BBC Worldwide (2004-2012) has also invested through his partnership with Edge.

Founded by Bolding in 2014, Jungle Creations is a digital media company that operates a range of popular food, beauty, and lifestyle brands on Facebook including VT and Twisted, which have attracted over 85 million followers.

Its in-house creative and production agency Treehouse creates and distributes social media video content for the likes of Heinz, McDonalds and Virgin. Last year, it became the most viewed media company on Facebook, hitting 5.28 billion views in November.

The London-headquartered company will use the funding to “rapidly grow” its existing offices in New York, Los Angeles, and Toronto in a bid to boost its global audience and tap into local market opportunities.

Jungle Creations will also use the finance to start to focus on longer form content, such as short documentaries and TV mini-series, and for the launch of Lovimals.com – an e-commerce operation selling consumer products from its videos and devising restaurant concepts, pop-up bars and cookbooks, inspired by its food and drink brand Twisted

In October last year it launched a delivery-only Twisted restaurant, enabling customers to order meals from the channel’s videos straight to their doors.

Bolding said: “At a time when many media companies and brands have struggled to navigate the growing influence of the Google-Facebook duopoly, our deep understanding of social media, marketing and content creation has been instrumental in the company’s success.

“This has directly enabled us to branch out into new avenues, from e-commerce, to running events and launching our own influencer agency. It’s an exciting time of growth for the company and this funding from Edge reflects confidence in our ability to engage global audiences at scale.”

Smith added: “Jamie has proven himself to be an incredibly inspiring and creative entrepreneur, and has built an exciting, ambitious and agile business, with an enviable audience.

“I’m delighted to be investing at such a pivotal time as the company looks to accelerate its international expansion with a number of promising and exciting ventures that will provide substantial revenue growth.” 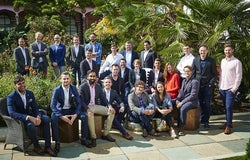