While it's difficult to sum up the many start-ups, guests, sponsors – and more – who made this year's awards so fantastic, we've compiled a short list of highlights from the night…

The stars of the ceremony were undoubtedly the Startups Awards winners.

Among them were entrepreneurs who had innovated unique solutions to the problems they faced, put their heart and soul into making their industry better, overcome personal and professional hardship to triumph in business, and more.

With so many fantastic start-ups in contention for each title, it would have been impossible to simply award one trophy per category – so, alongside our winners, we also celebrated two runners up in each category with Commended and Highly Commended awards, making for a grand total of 48 trophies given out to a variety of deserving businesses.

Taking home the coveted Start Up Loans Start-up of the Year award – and being crowned overall winner of the Startups Awards 2017 – was Bulb, which supplies renewable electricity and gas with a commitment to protecting the environment, providing exceptional customer service and keeping costs down for customers. 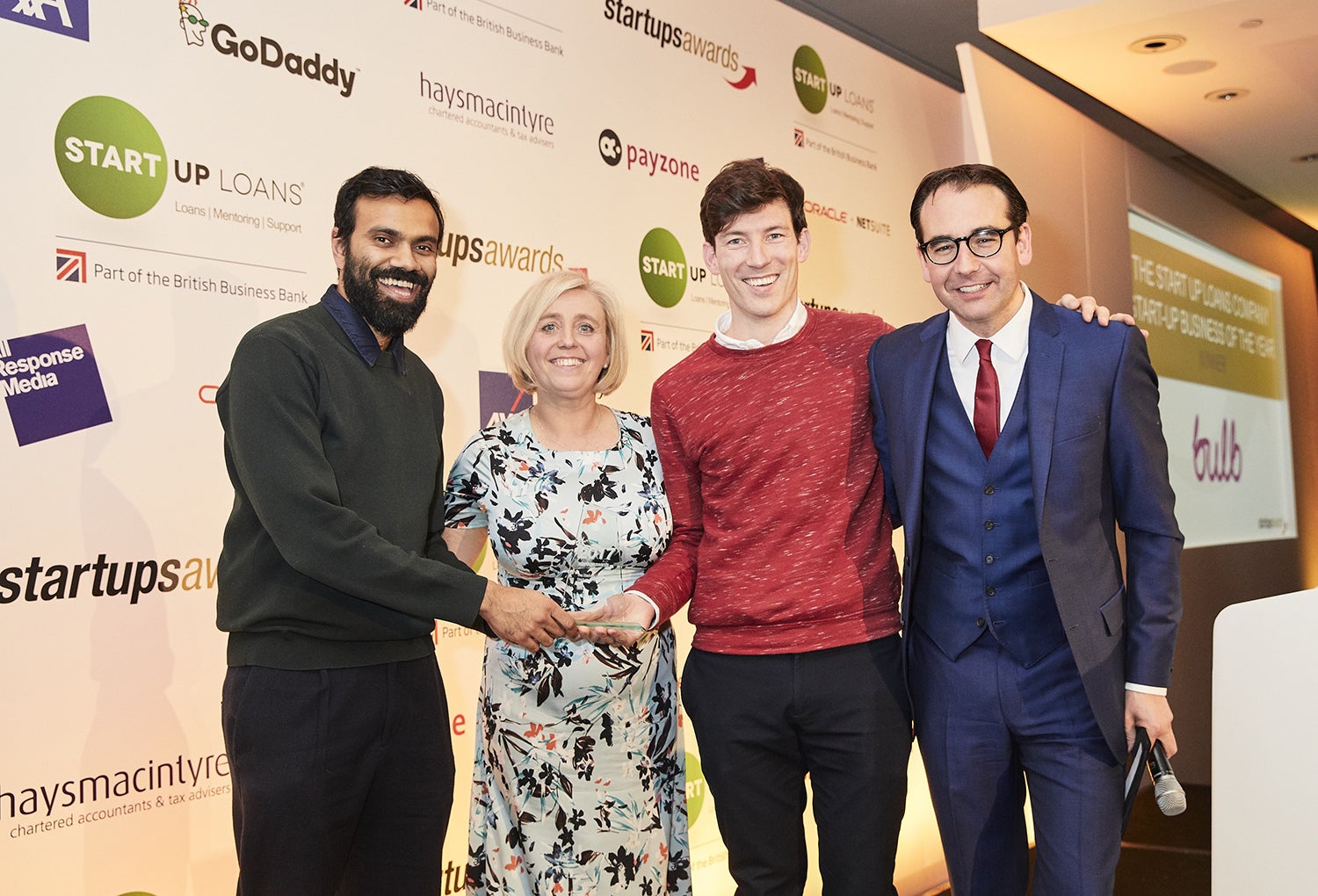 More finalists than ever

This year, the standard of entrants was so high that we shortlisted a record-breaking 77 start-ups for the awards, with eight businesses shortlisted for each award category. While we couldn't give them all an award, each finalist was truly deserving of recognition for their achievements.

The majority of these finalists joined us at the ceremony, and with such a wide variety of incredible start-ups in the room, guests were able to gain inspiration from one another, make beneficial connections and get to know their standout peers in the UK's start-up landscape.

Learn more about our finalists here!

To bring the Startups Awards 2017 to life, Startups.co.uk joined forces with a number of incredible sponsors, all of whom we couldn't have done it without. These included headline sponsor The Start Up Loans Company, alongside sponsors AXA Business Insurance, haysmacintyre, Payzone, All Response Media, GoDaddy and Oracle NetSuite. 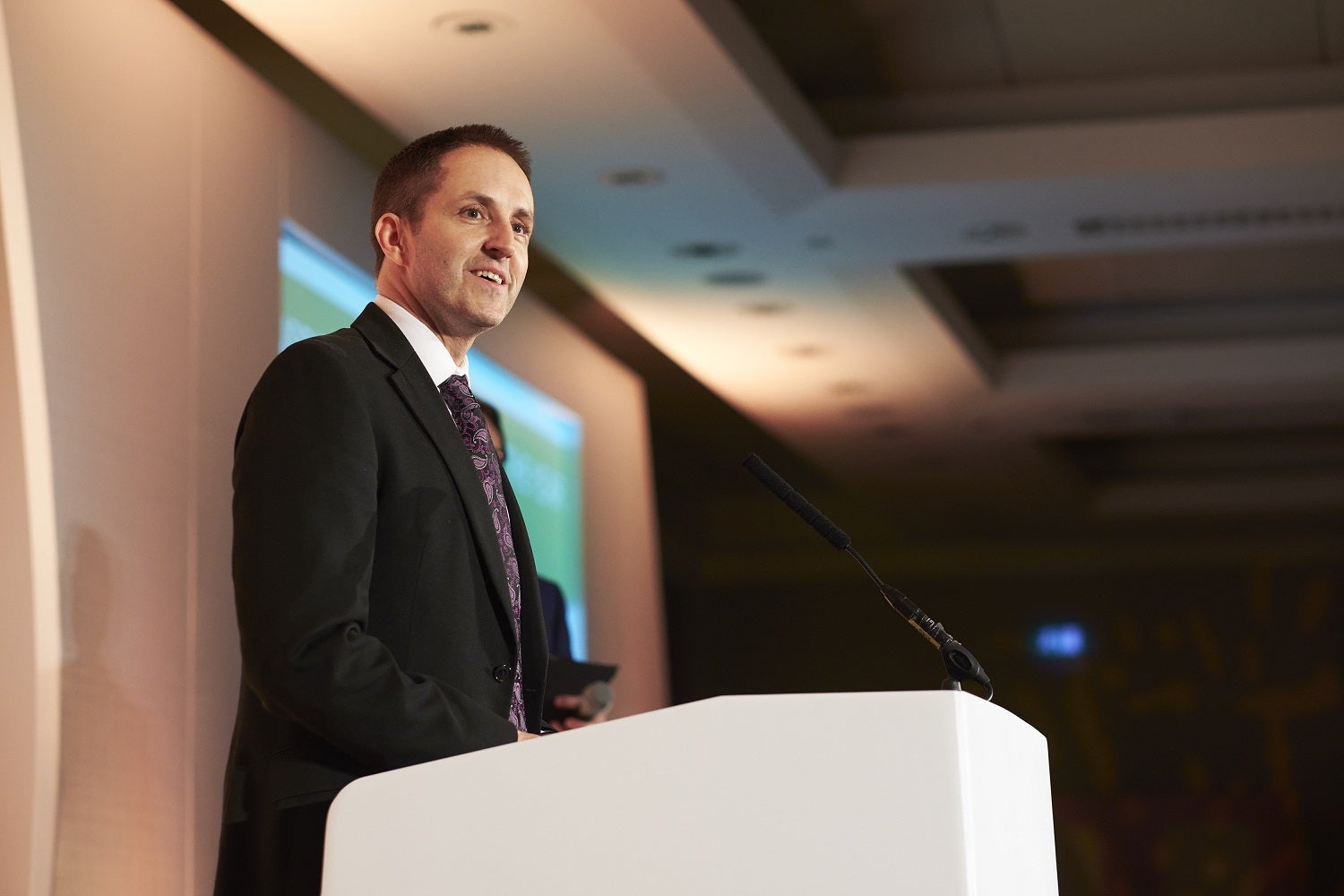 Later in the evening, The Start Up Loans Company's CEO Joanna Hill presented the overall award to winning business Bulb. 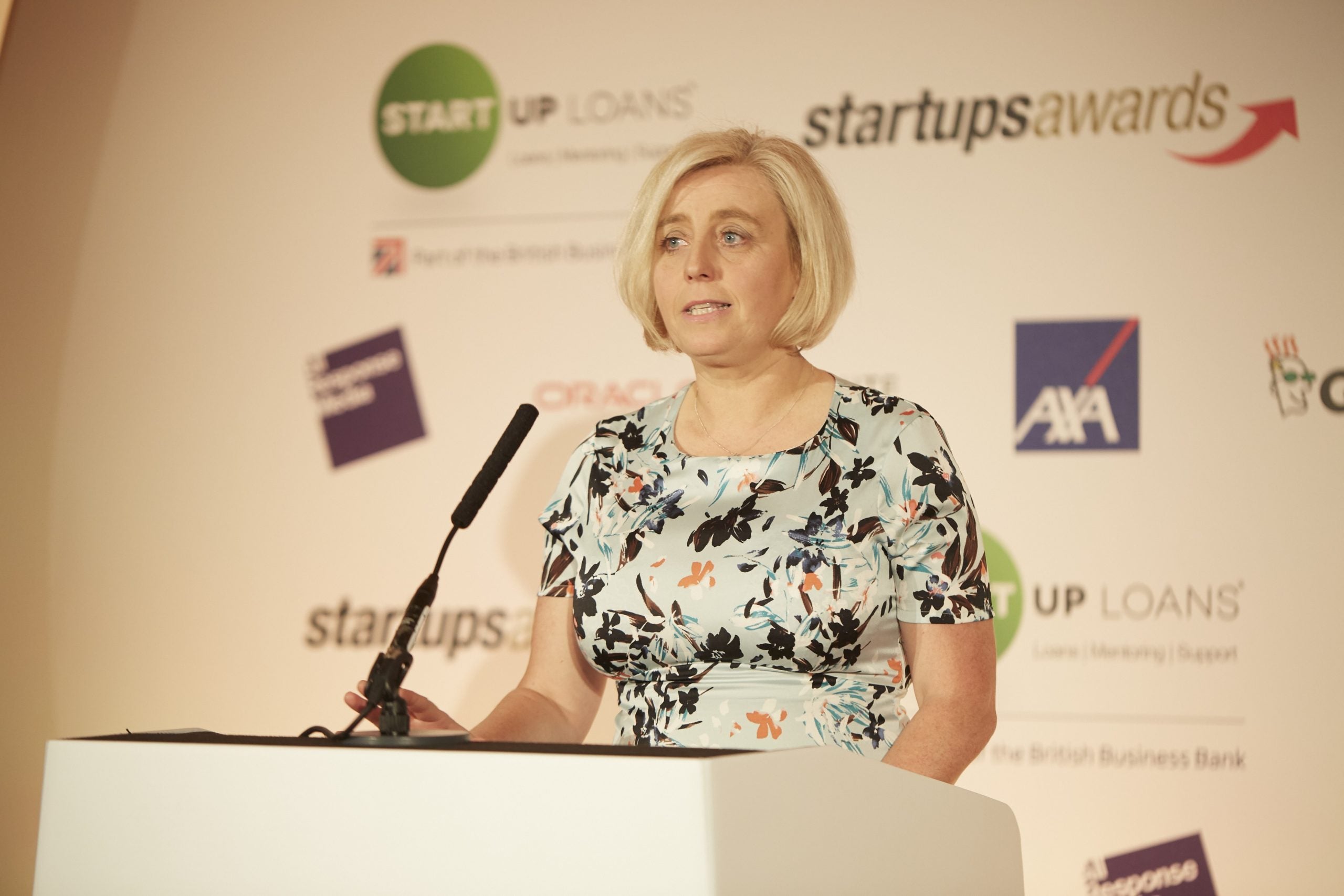 Every year, each of our finalists are in the running for the People's Champion trophy – the only Startups Awards accolade whose winner and runners up are voted for by members of the public.

This year we saw a record-breaking number of people take to their computers, smart phones and tablets to vote for the shortlisted start-up they thought deserved the award most, with a total of 38,000 votes cast – more than ever before in the Startups Awards' 14-year history. 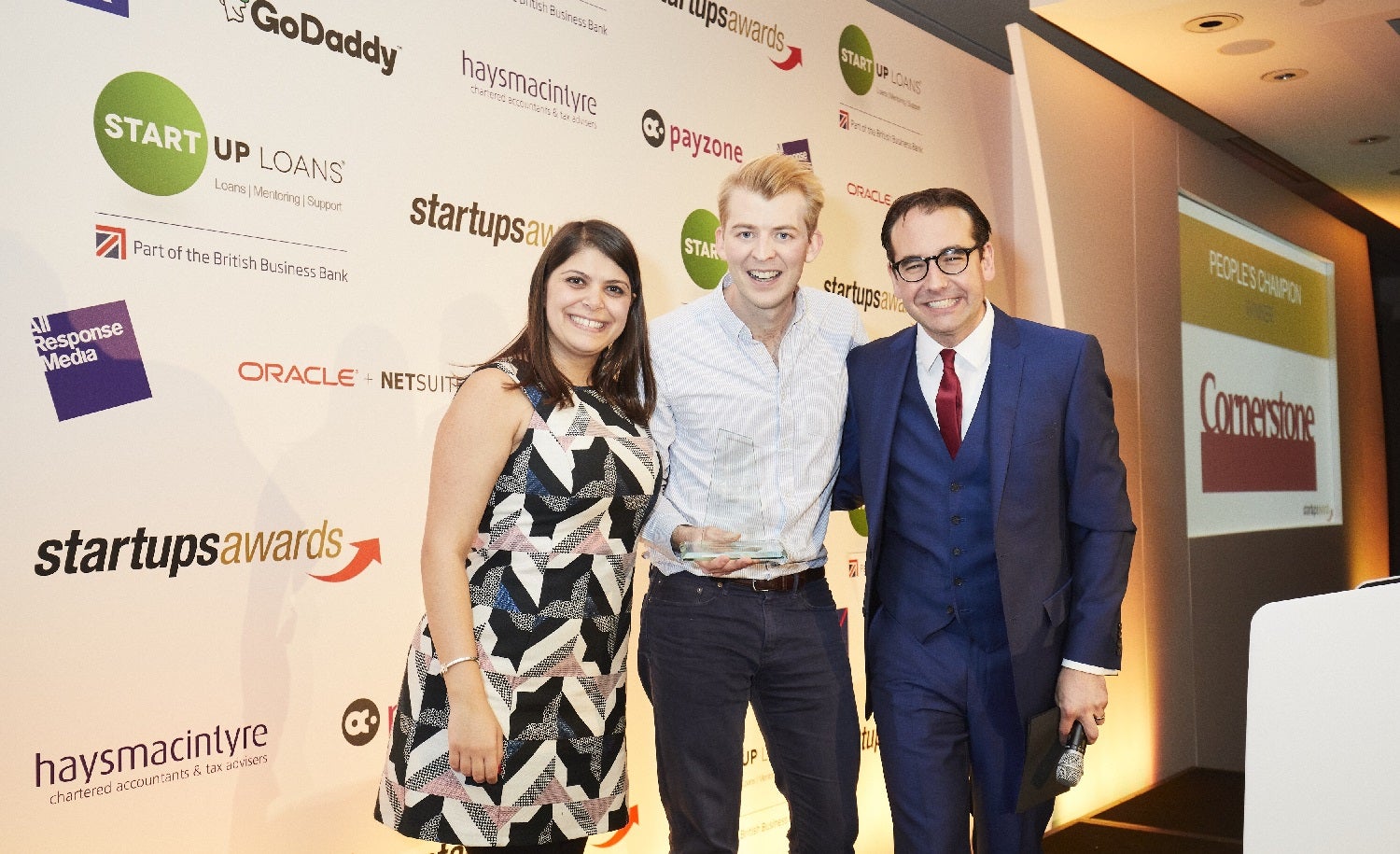 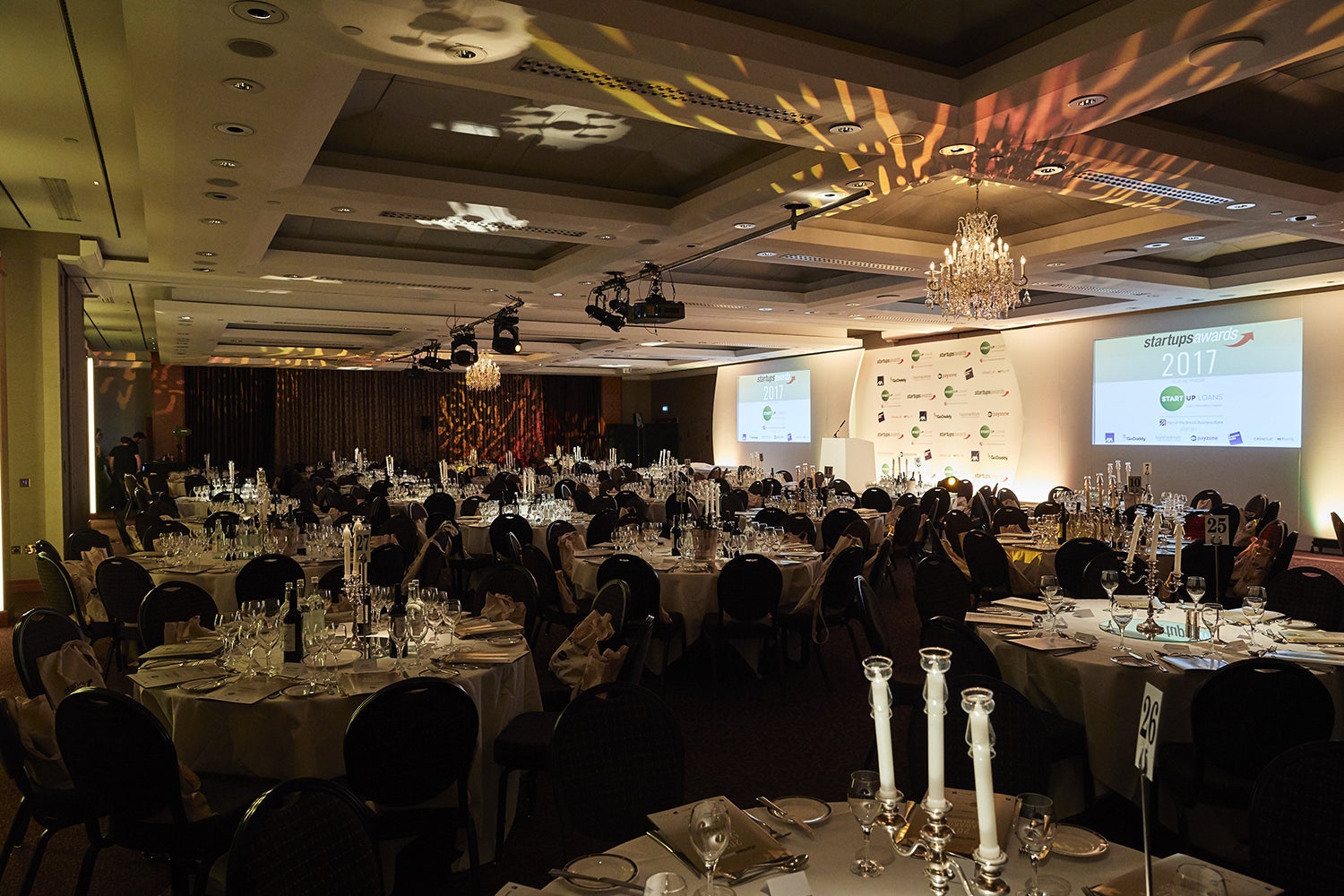 Ahead of the awards ceremony, guests were served a delicious three-course meal and fine wine, and sponsors, finalists and guests were free to network with one another and enjoy the celebratory atmosphere. 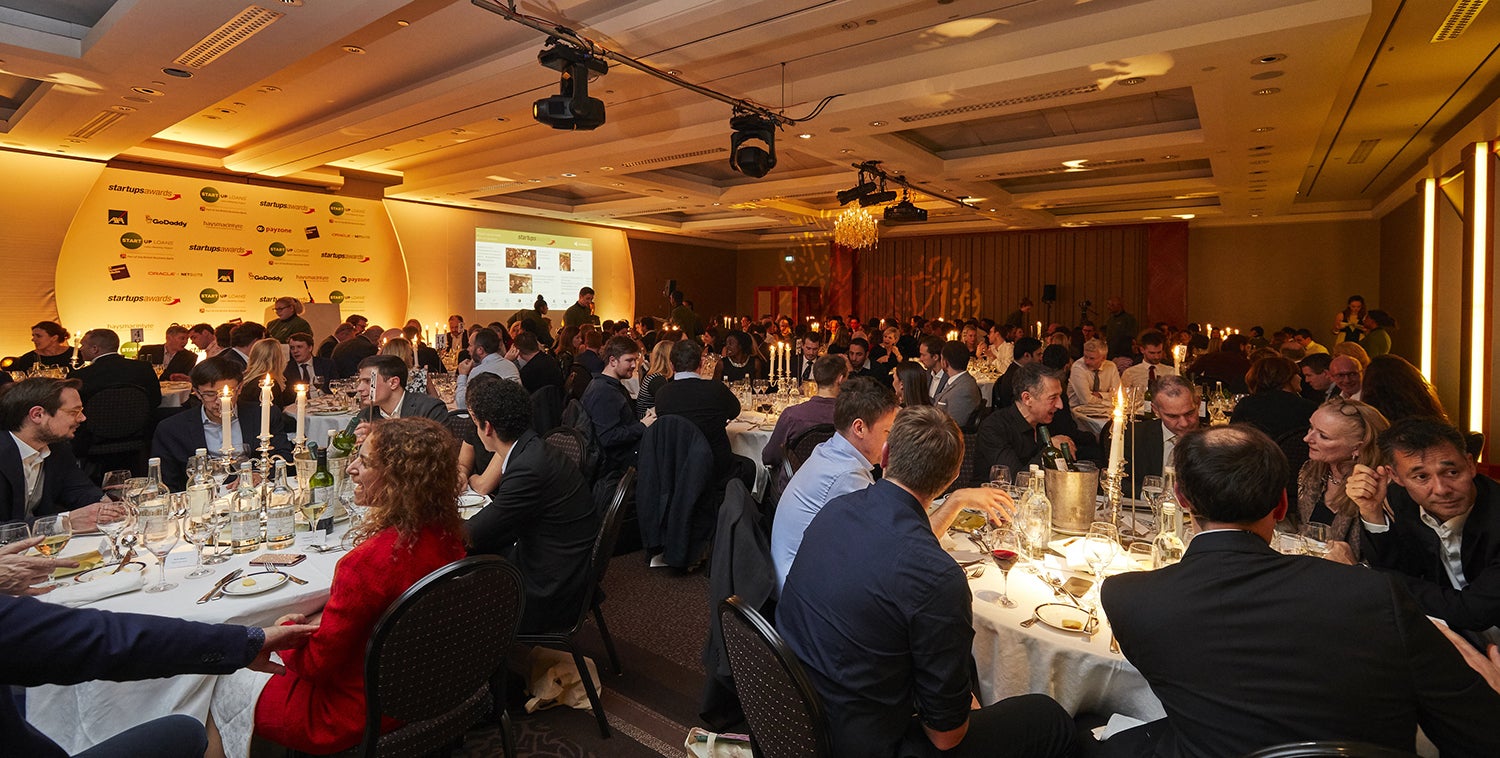 Esteemed guests and a brilliant host

The Startups Awards 2017 judging process saw a range of esteemed entrepreneurs come together to scrutinise our finalists and select the winners and runners up among them.

On the night of the ceremony, a number of these judges came along to watch the businesses they championed take home trophies, and perhaps present a few themselves. 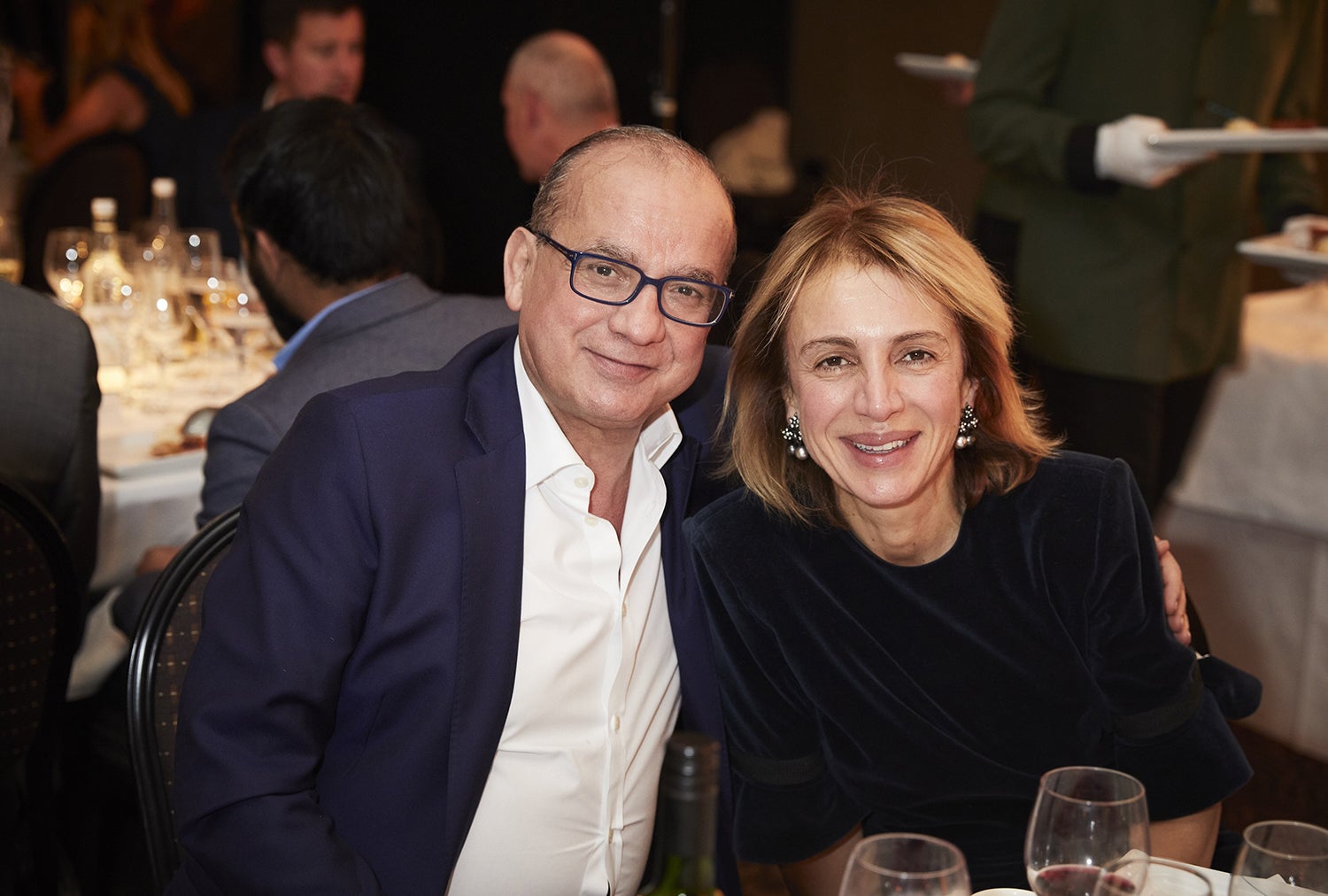 Jon Wright, Startups Awards judge and co-founder of Innocent Drinks and JamJar Investments, and fellow judge Giles Brook, CEO EMEA of coconut water giant Vita Coco, both joined in with the business celebrations and presented App of the Year and Product Business of the Year respectively. 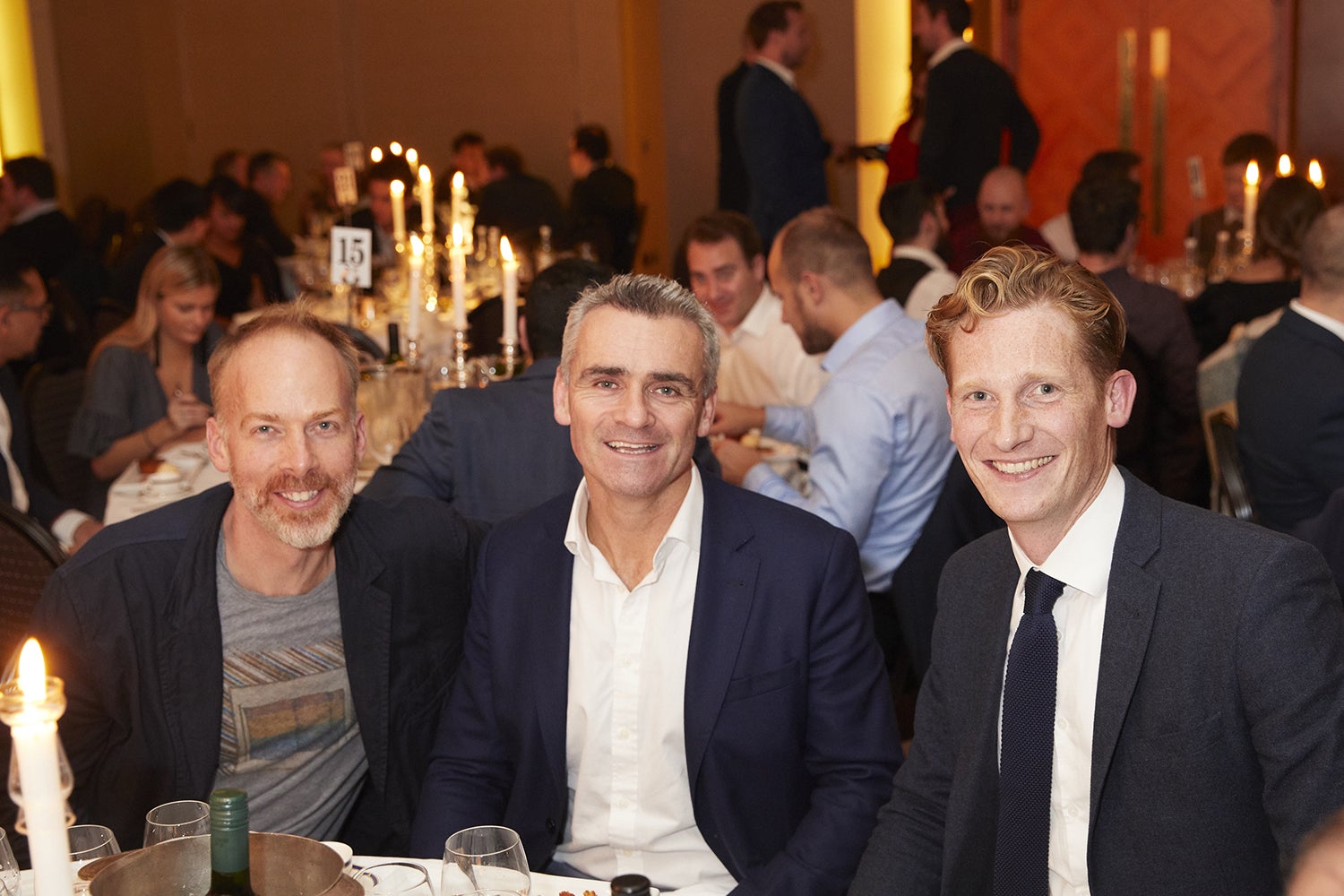 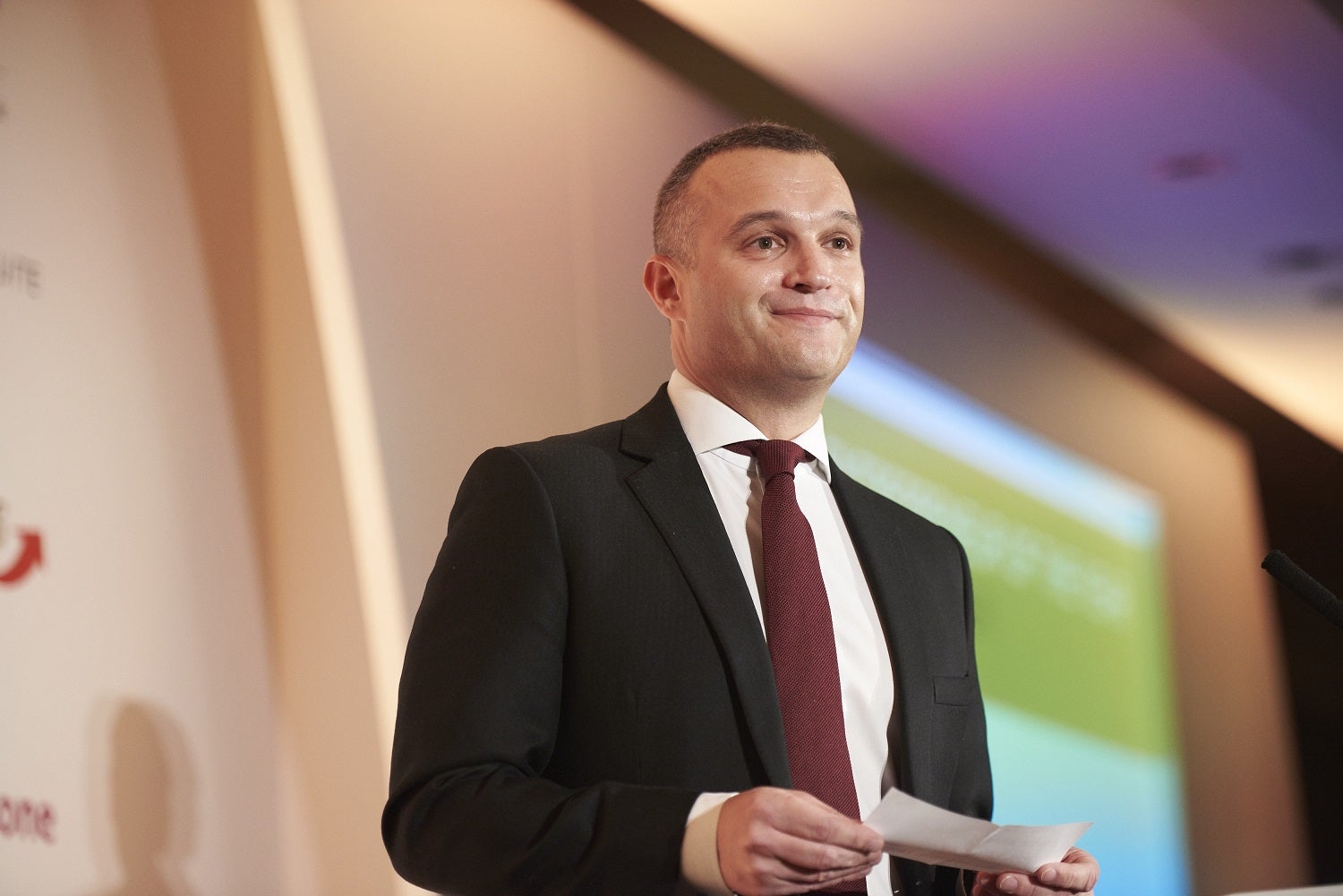 Bringing the whole ceremony together was Oli Barrett MBE, seasoned master of ceremonies and founder of StartUp Britain, who introduced each award with a signature dose of humour. 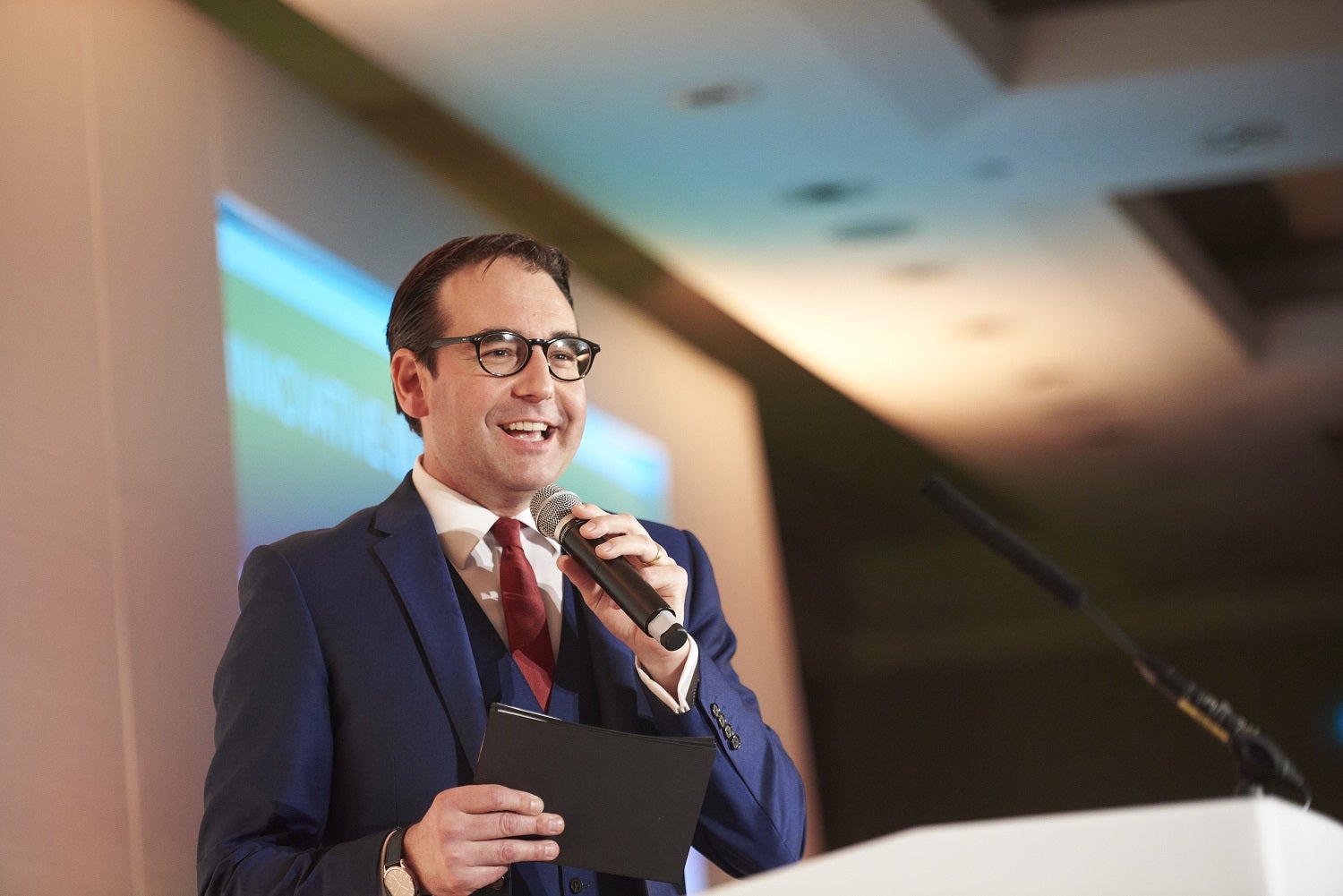 Throughout the evening (and beyond) we saw fantastic engagement on social media, with #StartupsAwards reaching seven million people across Twitter! Winning businesses were especially quick to share their excitement with the world:

We're so proud that #MedShr was Highly Commended in the Founders Pledge Social Impact Award and Commended for App of the Year at the #StartupsAwards! #DoGood #Startup #Medicine #MedEd @startupstowers pic.twitter.com/SkfRXj03kk

Team Bulb have won the big one 🤩 THANK YOU to all of our wonderful members for helping us win #StartupsAwards Business of the Year🥇🏆🎖 pic.twitter.com/mmU1omK16y

Thrilled to have been awarded #StartupsAwards Women in Business Award last night @startupstowers So many great businesses in the room, was a honour to have been chosen https://t.co/u9nu81McaS

Very proud and excited that our Operations Director Hannah Drury won Franchisee of the Year at the 2017 #StartUpsAwards It was a wonderful evening and we were honoured to be involved and met so many incredible people and heard lots of inspiring stories. Thank you for having us ❤️

What a way to head into the weekend! Last night we were awarded with the ‘People’s Champion’ at The Startups Awards for the 3rd consecutive year! This win means a lot to us as it was voted for by the public. A record 40,000 votes were cast and we cannot thank you enough for helping us win People’s Champion Award for the third year in a row! #StartupsAwards A post shared by Cornerstone (@cornerstone_hq) on Dec 1, 2017 at 10:31am PST

Following the ceremony, we received wonderful feedback from our guests. Here are a just a few of the many highlights:

“Thank you for putting together a fabulous evening – we were so chuffed to have won! We didn’t quite believe it. It was clear a lot of thought and effort went into the event… we had a great time.”

Pip Murray, Pip & Nut, Young Entrepreneur of the Year and Product Business of the Year:

“What a fantastic night and lots of celebrations in the Nest (office!) today! Wanted to say a massive thank you to you and the Startups team's support of Pip & Nut over its journey so far!”

“Just wanted to give massive thanks to you all for everything – the organisers did a brilliant job of everything and it was a huge honour to be up on stage with some extremely impressive people and businesses. The actual award is up on display in the Cardiff park and our customers are quick to compliment!”

“It's very inspiring to meet so many people with fresh enthusiastic ideas and following through to create dynamic ventures.”

To find out more about the Startups Awards, click here.