Described as “part venture capitalists, part start-up”, Collegiate Capital provides the finance, tools and support for talented teams to grow companies from scratch and it believes its “responsibility is greater than writing cheques”.

Founder Abbas Kazmi’s goal is to make Collegiate Capital the most entrepreneur friendly venture capital (VC) firm and company builder. Focused on pre-seed, seed and Series A stage companies, it offers a comprehensive range of services designed to “supercharge growth” including technological and legal support, marketing, international expansion and accounting services to name just a few…

It also operates an extensive network of 37 universities around the world, investing in and helping to commercialise disruptive ideas and translate academic research into products solutions and businesses. Some highlight examples already include Spring Health out of Yale University.

Founded only a year ago, Collegiate Capital – taken from the Latin for ‘companion’ – already has a network of more than 100 mentors and experts, as well as several hundred venture capital, private equity, accelerator and corporate partners worldwide. It plans to invest more than $100m into cutting-edge companies and founders over the coming years.

This is impressive, obviously, but it’s all the more impressive when you consider that founder Kazmi – who has previously worked at BlackRock, Goldman Sachs, Deutsche Bank, and Bank of America Merrill Lynch amongst other financial powerhouses –  is still only 25 years old.

The serial entrepreneur founded his first company aged a mere 16 years-old and continued creating and selling businesses throughout university. He was also responsible for relaunching the Oxford Guild society in 2011 – a network which has helped him “open doors that traditionally may have been closed to others”. 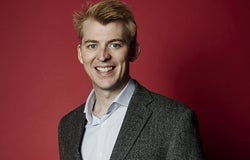