Beer52 will be a familiar name to Startups readers, having already featured twice in the Startups 100 index and winning our overall Business of the Year at the Startups Awards 2014. Impressive, but even more so considering founder and Young Entrepreneur of the Year James Brown has achieved all of these accolades by the tender age of 25.

An idea brewed up during a Harley-Davidson road trip from Edinburgh to Portugal, Brown wanted to share the array of delicious but little known craft beers he’d sampled on route with the world. In 2013, after securing an initial £20,000 investment, he started Beer52 with the support of fellow Young Gun Fraser Doherty – a subscription service sending customers handpicked beers from over 12,000 global microbreweries.

A few years later and the company is said to be the UK’s biggest craft beer club with more than 10,000 members and turnover in excess of £2.5m last year. Now backed by £200,000 of crowd and angel investment, Brown hopes to launch a new community based app and hit 20,000 members. With Britain’s appetite for craft beer on the rise, a knack for sourcing “the world’s best beers”, and a talented young entrepreneur at the helm, Beer52 looks set for great things. Watch this space. 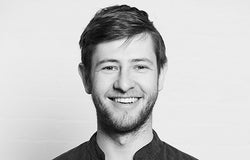