We’ve hunted far and wide to find the UK’s brightest young business owners. And now, after much deliberation, it’s finally time to reveal the 30 exceptional businesses that make up the Young Guns Class of 2018.

All aged 35 or under (average age of 30), the 49 founders of these fast-growth, disruptive businesses have had success beyond their years.

With sponsors haysmacintyre, the chartered accountants and tax advisers, and financial services firm Lloyds Banking Group, this is the 16th year for the annual awards which shines a light on the talented young entrepreneurs behind the UK’s most promising businesses.

It’s an exclusive list: Entrants must have built businesses which have raised at least £1m in external funding and/or have generated £1m or more in annual revenues.

The statistics speak for themselves – the Young Guns 2018 class have collectively generated a mind-boggling £369.6m in revenues with £111.86m raised in funding. All the more astounding when you consider that, on average, their businesses are only four years old.

And each year it seems our Young Guns get bigger and better. The Class of 2018 has an average turnover of £12.3m, nearly double the collective turnover of last year’s class, which was, in turn, nearly £3m more than the Class of 2016 (£6.8m).

These 30 businesses are boosting the UK economy and having a positive impact on the world around them:

Once again, we’ve assembled a thoroughly diverse list of businesses. It’s inspiring to see the weird and wonderful ideas being brought to fruition across the UK.

From energy (Bulb, Eversmart Energy, Hometree), to health (Live Better With, Thriva), and dating and friendship (Muzmatch, Peanut), the Class of 2018 are pioneering products and services which have made customers and investors stand to attention.

The Young Guns 2018 will now come together with alumni and sponsors for a celebratory awards luncheon at the prestigious Mondrian Hotel on Friday 28 September 2018, where the winners of the Top Gun and Golden Gun titles will also be announced.

The haysmacintyre Top Gun is awarded to a stand-out business from this year's Young Gun class while the Lloyds Banking Group Golden Gun is presented to an alumni business with exceptional achievements since gaining Young Guns status.

Ready to be inspired? Click the button below to see the full Young Guns Class of 2018. 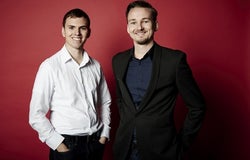 Class of 2018
Andrew Jervis and Felix Kenton: ClickMechanic
September 28, 2018
Back to Top