Following her debut blog for Startups on overcoming self-doubt to pursue her business venture, Lana Elie – founder of online floristry marketplace Floom – is back with the next installment of her business journey. This time, Elie talks us through how she realised the business idea and began to make it a reality through social media, web tools, and sheer determination.

How did I go from having a business idea to having a real business?

I get asked about this often and when I think about it, this is probably the stage where, more than any other, I was defined by the great people I was lucky enough to surround myself with. I also had to maximise my own skills and the tools that were available to me.

The business started being built because… well I just started building it. I’d not spoken to a single investor, I didn’t have a product – I’d not even left my job.

Yet somehow – and I guess this boils down to having confidence in both your own abilities and the strength of your idea – I didn’t have a seed of doubt about being able to raise or start building it.

Any moments of insecurity I’d had about the idea had vanished by this point, as I fleshed it out more and more I registered the company name and I even filed for a UK trademark.

I’d bought the domain (well floom.it, it turned out I’d have to wait a while longer, and spend quite a lot more, to get my hands on the dot com!).

I’d really began to materialise what the brand looked like. I didn’t have any savings, or wealthy relatives to fall back on, but what I did have was the accumulation of whatever I had left over from monthly pay checks. I can be terrible for frivolous spending, though yet another slightly different pair of minimalist white trainers isn’t really frivolous is it?!

In a funny way, just having the conviction to actually put money aside gave me as much belief in my idea as anything else.

Brand, business name, and the power of social

People often ask me if I had a product before I started the business and the answer is technically ‘er…no!’

Nothing was designed or built, but it felt like it was because of how fully I could conceptualise it. This was where all my past experiences came in; I had previously worked with luxury brands, creating global campaigns, and knew quite a lot about social engagement.

I had something that I knew how to build on my own and I could visualise what products it would sell, the aesthetic and creations we would align with, the tone of voice we would use etc. I had a brand and, of course, I had an Instagram account!

I’d started the Instagram account earlier in the year, months before i’d really formalised the idea, and before the name Floom even existed. I wonder if you would even still be reading this if I had stuck with the working title of A Floral Pursuit. This name is more evocative perhaps but nowhere near as effective as a memorable five letter domain name that features the same double ‘O’ sound as a certain popular website we all visit every single day!

I knew enough about what Floom was going to be but I didn’t really know how it would work from a technical perspective or exactly what the customer experience on the website would be. However, I knew that at it’s heart it was about getting better flowers to people – a place where florists large and small with genuine skills, could share their creations.

I knew it would be clean and simple and I knew that the flowers were just as important as the cards, the logo, and the entire identity.

So I started an Instagram for Floom. There I began to build a brand and, whilst I wasn't sure exactly what the logo would look like, or exactly what it would become, I had a place to test the fundamentals of the business idea. 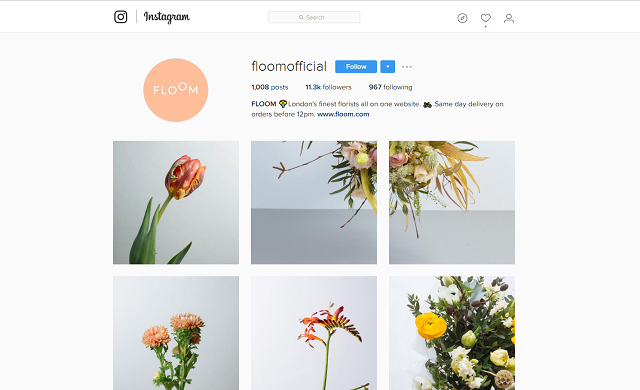 Without even realising all of this at the time, I was building so much more than a flurry of daily ‘likes’. Not only did I build a follower base, but I actually found the best way to discover florists. Using the Instagram ‘you may also like'  algorithm I discovered florists that weren’t making the top pages of Google, in fact some didn’t even have websites.

Once the Instagram account got some traction, I asked a friend to take some better photos and I built a landing page where people could sign up if they were interested. I didn’t know what Floom would be entirely, so all the page said was ‘be the first to know' alongside a sign up field.

By the time I went to raise funding, I had an email base of potential customers and potential florist partners – all without spending a dime. It showed there was some sort of interest in what I was building.

It might have been a little far-fetched, but there were at least a handful of people out there who wanted this and would become early adopters.