If you’ve ever watched the BBC’s Dragons' Den you might have wondered what it feels like to walk out of the lift and deliver a pitch to five stony faced Dragons.

On a rainy Wednesday in May 2015, almost exactly nine months ago, we did just that. This Sunday, the Oppo ice cream pitch we made all those months ago has finally aired, condensing our hour in front of the Dragons into 12 minutes on TV. Here’s the story:

Back in October 2014, soon after our initial launch into Waitrose, researchers from the BBC called to ask us to appear on the show.

We wanted real customers and shoppers to own shares in Oppo rather than sharp suited Dragons, and had chosen to use crowdfunding platform Seedrs. We went on to break a record as the world’s fastest food and drink company to raise investment using crowdfunding. Early in 2015 the BBC called again…

… and again we declined.

We didn’t need the money. But my brother Charlie Thuillier realised that even though we didn’t need investment, the chance to get in front of four million people on prime time TV would be worth millions in traditional advertising.

For a food start-up like Oppo generating awareness is what makes or breaks the business, so the next time the BBC producers called, we took a deep breath…

It's not about the money!

We knew that even if an offer was given it likely wouldn’t be right for Oppo and that we probably wouldn’t accept the investment. We made it through the auditions, got through the rigorous due diligence, and found ourselves on a train up to Manchester with a little freezer full of Oppo and bellies full of butterflies.

Walking through those lift doors (even if they were fake and there is actually no lift!) was an out of body experience. The producers like to add some tension, so leave you waiting for the doors to open.

We stood there for a few long minutes, with me thinking I probably shouldn’t have drunk so much water, until finally they slid back and we saw the five dragons for the first time. 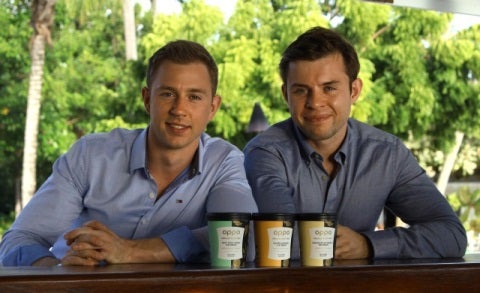 We both stepped out of the lift, running on a sort of auto-pilot. The first thing you realise, apart from the fact that the windows are as fake as the lift, is the fact that it’s not just two of you and five dragons.

There are about 30 other people and cameras in the room, all along the left hand side. We stood either side of the table and lifted up the black sheet to reveal our old tubs – as one wobbled and then fell – nearly sending the whole display tipping over.

And the pitch started.

Taking Dragon feedback on the chin

We didn’t get the usual grilling you often wince at on Dragons' Den. (Or at least we didn’t think we did – at the time of writing we hadn’t seen the edit yet…!) On leaving an hour later, the executive producer said it was the best pitch she had ever seen.

We thought this was going a bit far – surely Levi Roots was up there! As expected, Deborah Meaden was out immediately as she already owns an ice cream brand. Sarah Willingham opened the discussion by saying she was shocked at how good the ice cream tasted. 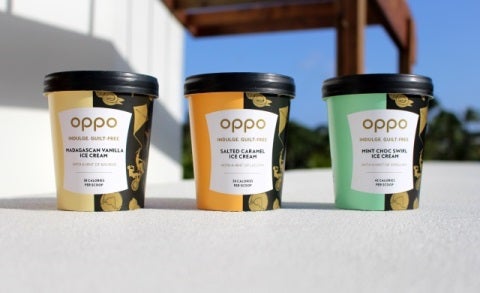 Peter Jones echoed this by showing his empty tub. Nick Jenkins quizzed us on what we replaced the sugar with, and was impressed that Oppo tastes so good yet contains a tiny fraction of the sugars and calories usually present in ice cream.

Sarah then declared that she could detect a faint after taste in the salted caramel flavour, and Peter agreed. We couldn’t believe it. We thought the Dragons might try to pick apart our numbers or our valuation, but it felt as surprising as a slap in the face to have two of them criticising one of our flavours.

We had grown used to people’s exclamations of delight after first tasting Oppo, and just assumed the Dragons would obviously like it. It was especially strange given the hundreds of 5* reviews we have had across Waitrose, Ocado, and Facebook and the feedback from the just over 100,000 tubs of Oppo we had sold so far was always hugely positive.

We wondered if it was something to do with the freezer, which we had been told to leave with the BBC while we spent the night in a travel lodge nearby. It could have been left unplugged leaving the ice cream to melt and then refreeze again. Or they could have eaten something strange before. Either way, that meant both Sarah and Peter were out.

Touker and Nick asked us some questions about our revenue projections and valuation, and ultimately decided that the market was too small for them. We have since smashed our targets and realised that the projections we gave were too conservative.

As for the market being too small – ice cream is worth over £1bn in the UK, and the trend towards healthier, higher quality food with less sugar is growing by the day. We suspect Oppo was too far developed for a Dragon to be able to take a large enough stake to be interested.

Life after the Den's looking good!

So, the Dragons ultimately didn’t invest. Which was ok really, because we had no intention of taking the money – we had already funded the business by offering shares to our fans which we felt was a much better (and more authentic) way of growing Oppo.

We left with what we came for: the chance to tell four million more people that you can indeed indulge in luxury ice cream… without looking like you have.

Nine months on, Oppo is in 1,300 locations around the UK including Wholefoods Market, Co-Op, Budgens, Holland & Barrett, as well as sports clubs, offices, hospitals, cinemas and hotels. We’ve been awarded the Guardian’s Start up of the Year, won the Healthy Food Guide Award, and accompanied the PM David Cameron on the Queen’s jet to Milan to showcase the best of British innovation.

But perhaps most excitingly, just last week we launched and closed our second round of crowdfunding on Seedrs, reaching our target of £150,000 in just six hours (for 5% of the business), and overfunding to £353,811 with over 550 investors who support our mission to show that health and indulgence can go hand in hand. If you are one of those, thank you.

If you missed out on this round, feel free to sign up here for more information on future opportunities to have a share in Oppo’s growth.

And if you haven’t tried Oppo before, find your nearest store here and let us know what you think!

Harry Thuillier is the co-founder of Oppo ice cream with brother Charlie.