Forget what you think you know about rum. Forget the navy. Forget pirates. Forget the rum and coke you buy when you want to feel like a local on holiday. And forget lazy Caribbean stereotypes.

This is the message from a new wave of UK rum producers, who want to chuck out the old assumptions and show you that rum is probably the most diverse spirit on earth. It varies hugely in terms of colour, aroma, and taste and is rapidly being embraced by millennial consumers.

You can be forgiven for not being too familiar with the ins and outs of rum. You may not even know when you’re drinking it… It’s the base for loads of cocktails and Bacardi, the UK’s leading rum brand, has forged a brand identity which hardly ever mentions the word rum. But it’s a drink with a fascinating backstory. Created by slaves working on Caribbean plantations, it was once accepted as currency, played a central role in the American Revolution, prompted a coup in colonial Australia, and continued to be given as a ration to Royal Navy sailors until 1970.

While there aren’t strict regulations dictating rum production, it’s always made from sugarcane molasses or sugarcane juice, which is then fermented and distilled, with the precise ingredients used and distilling process all impacting the flavour.

Why rum is a good business idea

First, we had the craft beer boom. Then came the “ginaissaince”, as the spirit cast off its associations with middle-aged women, pushed its origin story, and massively increased sales. And now rum is next in line for a similar resurgence. Sales have already begun to record strong growth, with figures from The Wine and Spirit Trade Association (WSTA) showing that in 2018, almost 35 million bottles were sold in the UK, with a total market value of just over £1 billion.

Sales of white rum, a mild version of the spirit that accounts for the majority of the UK market, are actually falling, with the overall improvement driven by the increasing appetite for golden and dark rums. Golden rum is aged in wooden casks and generally has a sweet flavour, while dark rum is aged for much longer and has a more smoky flavour. Both are favoured by a new generation of rum drinkers, with sales of golden rum in pubs, bars, and restaurants increasing by 7% from 2017 to reach £374 million. Moreover, the number of rum brands on the UK market increased from around 50 in 2006 to nearly 200 in 2018, underlining the rapidly increasing popularity of the spirit.

John Smith, the owner of Exmoor Distillery, a craft gin producer which is currently preparing to launch a rum made in-house from fermented molasses, notes that this growth is being driven by new drinking habits among younger consumers: “Although millennials drink less, they seek higher quality drinks and are known to be much more exploratory with new spirits and drink trends. Rum is becoming more of a premium and diverse product, which are qualities a lot of millennials seek when choosing a bottle from the shelves”. This chimes with research Harris Interactive conducted for The Grocer, which found that nearly 80% of 25-34 year-old spirit drinkers are partial to rum, as opposed to just over half of those aged over 55.

Bartenders are also central to this spirit of discovery, as Pete Holland, Global Brand Ambassador at That Boutique-y Rum Company, points out: “We have a highly motivated group of bartenders who are actively seeking out new flavour experiences to work with, and this helps the demand, which in turn showcases the rums.” One of this new breed, Sly Augustin, owner of London’s Trailer Happiness tiki bar agrees, saying that “the number of producers making traditional unaltered rum has increased alongside the public’s curiosity, meaning our selection has increased considerably,” and “we don’t have enough space to house all the rums we’d like to.”

Yes, for the most part. One of the few post-Brexit trade agreements the UK has managed to sign is with a body that represents several important Caribbean agriculture producers, including Barbados, Belize, Dominica, Grenada, Guyana, Jamaica, St Kitts & Nevis, St Lucia, and St Vincent & the Grenadines. This ensures that, even after the UK has left the European Union, no tariffs will be placed on things like bananas, sugar cane, and rum.

UK rum production should therefore keep going strong regardless of Brexit, although there is the ever-present risk that discretionary spending on things like craft spirits would fall if the UK’s departure from the EU had a significant negative impact on the UK economy. 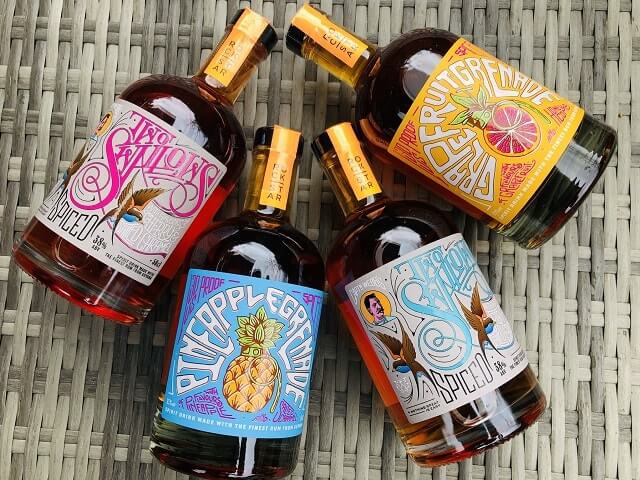 With the rapid growth of the flavoured and spiced rum categories, new opportunities abound for companies with fresh takes on this venerable spirit.

One brand making waves in this space is Rockstar Spirits, which was founded in 2018 by Tom Hurst after he spent 20 years in the drinks industry. Inspired by the “flavour innovation and desire for high-quality ingredients that fuelled the craft beer and gin revolutions”, Rockstar is applying the same principles to rum, while retaining the traditional tropical flavours and “overproof” alcohol content (higher than 57.5% alcohol by volume).

This ethos has led to a range that features varieties like Pineapple Grenade Overproof Spiced Rum 65% and Captn Webb’s Two Swallows Cherry Rum 38% which, like all Rockstar rums, are produced with premium imported rum from the Diamond Distillery in Guyana. Within its first year of operation, Rockstar has already been featured on ITV’s This Morning and stocked in major retailers like Selfridges and Majestic Wines, illustrating the opportunities available in this area.

Of course, producing a new variety is only one way you can take advantage of the rise of rum. This could also be the ideal time to open a rum-focussed bar, one that educates customers on the variety and rich history of the spirit, as well as providing invigorating taste experiences. Retailers, on the other hand, may want to look into new product lines in order to cater to an adventurous customer base that’s seeking new interpretations of this classic drink.

There are inherent sustainability issues with rum. Chiefly, you can only make it with sugarcane and that only grows in tropical climates, so there are obvious carbon footprint issues associated with shipping it – or the rum produced from it – halfway around the world. You also need to consider how the energy powering the rum production process is produced, and what to do with the waste water that is an inevitable byproduct of making rum.

Belize producer Copalli is a leader in sustainable rum, and shows that innovative solutions to these issues can be found. Its rums are made using filtered rainforest canopy water, yeast and organic sugar cane grown on the farm’s distillery, with the distillery process powered by biomass, and waste water filtered through probiotic ponds that neutralise pollutants. It’s a remarkable effort and shows it is possible to produce rum sustainably. Negating the environmental impact of transporting it to the UK however is a far bigger challenge.

One word has driven the rise of craft spirits and comes up again and again when talking to independent rum producers – authenticity. Tom Read, Head Distiller at Genuine British Rum says: “Brands need to be as honest and as transparent as possible. If you are serious about what you do, then educate the consumer and build a brand that offers, quality, trust and authenticity.”

John Smith, owner of Exmoor Distillery, adds: “Do your research and find what makes your rum different to other brands. Source the finest ingredients, and don’t stop until you have found the winning recipe. As with gin, I think the rum market will soon be filled new recipes from all over the UK, so brands must stand out to be seen.” And Tom Hurst, founder of Rockstar Spirits stresses the need to be creative and take risks: “Be bold, the drinks market is currently extremely open to innovation, so try and create something that’s not been done before and you may be able to seriously reap the rewards of your bravery.”

Finally, Matt England, founder of Sun Rum, stresses the importance of patience and persistence: “The consistency of your message is crucial. If you believe the brand and product are relevant, keep on going even if no one seems to be listening. Eventually people will take notice and when they do, you’ll be more credible and compelling if you’ve maintained your brand story throughout.”

Business ideas
The metaverse: How should small businesses prepare?
February 28, 2022

Business ideas
Things are more than well in the wellness sector
February 4, 2022
Back to Top