Sunday's episode of Dragons' Den saw a range of start-ups – from an innovative advertising solution to a handwriting teaching method – all fight for investment from the panel of business giants.

The installment even contained one or two surprises, including a youthful-looking business owner who turned out to be much older than Peter Jones thought, and a former banker and Dragon who revealed herself to be a motorbike afficianado.

However, only two of the entrepreneurs who pitched their businesses to the Dragons walked away with funding and a beneficial relationship with a Dragon. But who won over the investors, and why? Read on to find out…

Derby-based young entrepreneur Edward Hollands entered the Den with a potentially lucrative advertising concept in the form of DrivenMedia, a business that turns commercial trucks into mobile billboards for business clients.

According to Hollands, each trailer is seen by an average of 55,000 people across the UK each day. This, the entrepreneur explained, puts cost per thousand at a mere 75p, making it “the most cost-effective advertising platform in the UK today”.

Peter Jones was quick to highlight that lorry advertising isn’t a new concept, but Hollands explained his business is different as drivers must drive five hours a day, five days a week to keep the advert visible – and the business uses GPS trackers to make sure this is happening.

Following Jones' shock that the youthful-looking Hollands was actually 22, the entrepreneur said that in the 20 months the business has been trading it has signed up four trucks, but has over 1,000 trailers that it can access within 24 hours.

Hollands explained that advertisers pay £7,800 plus VAT for a 12-month package, and with production costs per vehicle sitting at roughly £5,500, Hollands makes what Jones called a “really good” profit of around £2,000 per contract.

Touker Suleyman, however, felt DrivenMedia’s prices were too high – and advised Hollands to focus on reducing printing costs by sourcing his own raw materials, in turn enabling lower costs to customers. Hollands’ appreciation of the idea seemed to hint at a potential investment to come from Suleyman.

Rather than costs, Jenny Campbell was concerned by the apparent lack of take up from advertisers. Hollands attributed this to a lack of awareness about his business, but told the Dragons he was targeting car insurance providers and had strong interest from both Be Wiser and CarFinance 247. Campbell, who knows the finance market like the back of her hand, was pleased by this.

Taking a different focus, Deborah Meaden asked about the team behind the business – which turned out to be just Hollands, plus two investors of a similar age to himself, both of whom had put in £5,000 for a 10% stake.

But when she requested some financial figures, the pitch squealed to a halt as Hollands struggled to tell her his projected net profit. What followed were some sage words from Meaden about the importance, as a business owner, of knowing your turnover, margins and net profit inside out.

Jones’ ears had pricked at a different set of numbers, however, and he questioned why the business had been given a £300,000 valuation for the Dragons and a £50,000 valuation for Hollands' investor friends, enquiring: “Is that because you think I’ve got more money than them?”

When Hollands misguidedly said it was because his investors were young and could work with the business for 50 plus years, Jones asked “Are you suggesting it’s because I’m old that you don’t want to give me too much of your company?” But Hollands took the awkward incident with good humour: “I’ve got to stop digging!”

Hollands’ need for a full-time mentor was the main reason the Dragons cited as, one by one, they declared themselves out. Campbell, however, was willing to guide Hollands and made an offer. In possibly the fastest deal ever to be made in the Den, Hollands accepted without skipping a beat.

What the Dragons said:

Tej Lalvani: “Edward, I think you’re very investable. I think you are confident, you listen to advice. As a business, in terms of size, I think it’s very small. I think you need to build it, prove it a bit more, the model, and make it work. But unfortunately, the business for me today… I won’t be investing. But all the best.”

Peter Jones: “I like this concept, I think that this is a concept for the future. I think if you’d got really on top of your number and came in here with a really concise plan, it could have gone really well for you. But it’s too early stage at the moment for me to take you on that journey and invest in you. So I’m going to say that I’m out. But I wish you every best of luck, because I think you are an entrepreneur-in-waiting and you’re going to make it happen.”

Deborah Meaden: “Edward, my job, I feel, as an investor, is to take the seed of this idea and to really make that business work. Not to become a mentor, a daily mentor, running a business. And I think you’re still in that phase. So I’m really sorry, Edward, but I won’t be investing.”

Touker Suleyman: “I am excited for you, and I think you will succeed. But you need intense mentoring. And it’s disappointing you live in Derby, because I would have liked you in my office every day, working with us, you know? I would have liked to be your mentor. But it’s not going to be possible today.”

Jenny Campbell: “I sold my business last year, having built it from a very poorly business to a very successful business. And I had a fleet of 4,000 ATMs in the UK and a thousand in Europe. They’re metal boxes. I know how to wrap metal boxes. You are highly investable. I am going to make you an offer. I’m going to offer you all of the money, but for my investment in you, I would want 20% of your business.”

In an attention-grabbing and somewhat noisy entrance, engineer Chris Frappell rode into the Den on his motorbike in order to pitch Chain Monkey, his tensioning tool designed to make maintaining motorcycle chain tautness quick and easy.

Alongside the flagship tool, Frappell had brought his entire range of motorcycle lubricants, cleaning products and complementary tools for the Dragons’ perusal.

According to the entrepreneur, “there’s absolutely nothing out there” that can compete with the Chain Monkey tool. A sure-fire way to win brownie points in the Den, Frappell went on to tell the Dragons that the product has been granted a UK patent, and has further patents pending for Europe, the USA, China, India and Japan.

When, to biker Campbell’s amusement, Lalvani asked why riders wouldn’t simply have their bike professionally serviced when the chain needed tweaking, Frappell explained that such services cost at least £30 a time, will take around an hour and will need to be done four or five times a year.

In comparison, Frappell claimed the Chain Monkey, which retails at £24.99, turns the task into a quick 15-minute job – proving the usefulness of his product to the reassured Dragons.

Campbell – “the only qualified motorcyclist in the line-up” – wanted to know about the tools’ manufacture. Frappell shared plans to find a company who would assemble the product for 46p (and relieve his mother of her current Chain Monkey assembly duties).

Frappell then revealed that Halfords had shown interest in retailing his whole range across 400 stores, impressing the Dragons.

However, when he revealed immediate plans to expand into the US, the Dragons grew concerned. Suleyman queried: “You want to go into the states, however you haven’t really conquered the UK.” Frappell explained he had been approached by a US distributor, but then admitted that this had been six months ago with no confirmation since. At this, Suleyman seemed ready to leave negotiations.

Despite this, he, Campbell and Meaden all placed offers on the table – with Campbell, who asked for 20% equity, keen to offer her motorcycling passion, and environmentalist Meaden , who wanted 25%, eager to help the entrepreneur make his chemical-laden bike-cleaning aerosols greener.

Suleyman, meanwhile, asked for a more hefty 30% stake – but offered ambitious plans to get Chain Monkey into the cycling world as well as motorcycling using his connections in the industry.

After consulting the wall, Frappell asked Meaden and then Suleyman if they could drop their percentages lower. After both said no, Suleyman told him “this is not a barter game”, however, seeing that the deal might slip away from him when Frappell said his “absolute limit” was 25%, he dropped to 25% and Frappell accepted his offer.

What the Dragons said:

Peter Jones: “I have to say, I think the product seems pretty neat, and you’ve clearly done a really good job and it definitely does what it says on the tin. But as an investor you’ve got to have a feeling where you’ve got a really invested interest in motorsport, or you see a really big business opportunity that can take off. I’m struggling with both. So I’m seeing the opportunity quite as a small, very niche product. I don’t think you’re going to make a lot of money from it. So, I’m going to say that I’m out.”

Tej Lalvani: “I’m also concerned about the size of the market. And I’m not sure how much value I could add for you. So, unfortunately, I won’t be investing.”

Jenny Campbell: “Chris, I do know the motorcycling scene, and I do resonate with this market. So, I can see that this business will do well. You’re great, you can tell how competent you are, so I buy you as well. I am going to make you an offer. My offer to you would be all of the money for 20% of the business.”

Deborah Meaden: “The thing I found mildly alarming – it’s aerosol, and it’s quite chemical. You look at this list here, and think, ‘oooooh.’

“I would love to be the people who worked on getting it more environmentally friendly. So I’m going to offer you all of the money. I want 25% of the business.”

Touker Suleyman: “Chris, could that be used for bicycles? The cycle business, I believe, today, is probably the biggest sport in the world. And I am involved in the bicycle world through Bikesoup. It could well be that we can convince the brands to sell one of these along with their bicycles. I’m going to make you an offer. But my offer, really, is based upon that I can open more doors for you in the cycle world. I’ll give you all the money, but I want 30%.” 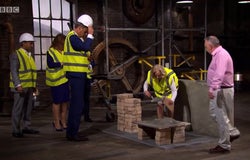