New research published to coincide with Equal Pay Day this Thursday 10 November reveals the true extent of the wage gap which exists in the UK – despite the legislation of the 2010 Equality Act which makes it illegal for men and women to be paid differently for doing similar work.

In technology, this wage gap is still prevalent with a 9% drop in pay for women compared to their male counterparts – equivalent to £5,000 a year in salary terms.

When compared to the wage gaps of America, Canada and Australia for tech positions, the UK fared the worst with the largest wage gap (9%): 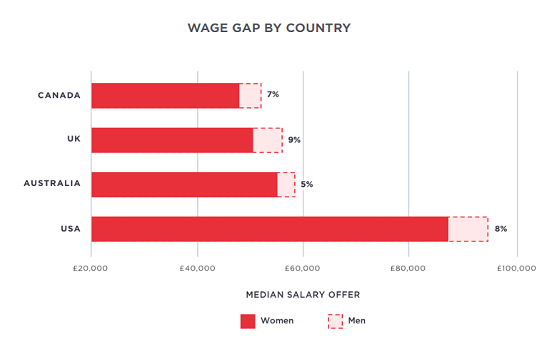 In the report, Hired also flagged a study from Deloitte which indicated that, at the current pace of change, the pay gap will not be eliminated until 2069: “For context, not only is that more than half a century away, but it’s also nearly a century after the Equal Pay Act of 1970 was introduced.”

On the back of the research, Hired is encouraging business owners to “investigate their compensation policies and identify possible issues of gender bias that may be present” in your organisation.

To learn more about equal pay and how to calculate how much you should pay your staff, click here.