The number of UK small and medium business looking to raise finance via the government’s Enterprise Investment Scheme (EIS) has reached “record levels”, with approved applications up by 16% on 2011/2012, according to new research from Chancery Investment Partners.

Designed to encourage investors to back unquoted companies through generous tax breaks of up to 50%, EIS is said to have become “increasingly popular” with small and medium enterprises who have struggled to secure bank funding.

The study found that EIS applications for 2013/2014 jumped to 2,718 from 2,336 applications the year before with levels climbing each year since the 2008 recession. 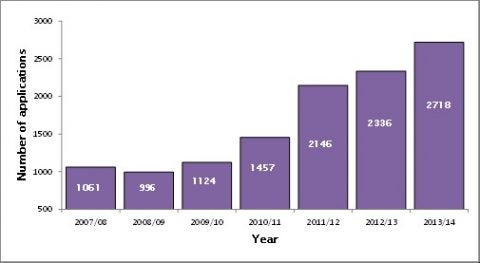 The findings merge with recent data from HM Revenue & Customers (HMRC) which showed the amount raised through EIS had reached £1.017m, its highest level in a decade.

Chancery Investment Partners partner, Gary Robins, discussed, says: “EIS is becoming ever more popular among credit-starved small and medium businesses looking to fund the next stage in their growth.

“EIS has been vital for these businesses, because the banks have practically withdrawn from lending to them. The big banks have been focusing on reducing their lending and repairing their balance sheets instead.