Two UK start-ups have won a share of a £1m prize from Sir Richard Branson following the finale of VOOM 2016 (formerly known as Pitch to Rich) – said to be the nation's “biggest and most valuable” pitch competition.

After pitching to the panel and an audience of over 600 entrepreneurs and journalists – including Holly Tucker of Notonthehighstreet.com, motivational speaker David McQueen, and Startups.co.uk's very own Megan Dunsby – the judges unveiled MacRebur and bio-bean as the two overall winners in the ‘Start-up' and ‘Grow' categories respectively.

Scottish start-up MacRebur was awarded for its early success in having developed a method and recipe to produce new road asphalt out of waste plastic.

London-based bio-bean (featured in the Startups 100 index) was named a winner for having established a cleantech business which recycles waste coffee grounds from your morning cup of coffee into sustainable bio-fuels.

Smaller separate awards were also granted at the event, with up-and-coming watermelon drink start-up What A Melon gifted £50,000 towards its crowdfunding campaign after winning the Crowdfunder Award. 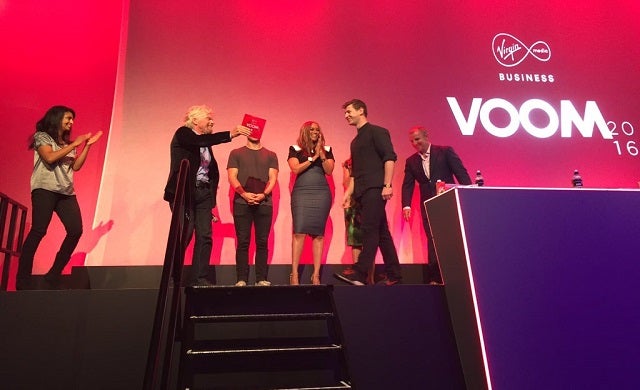 Each start-up will now receive a prize package which includes £50,000 cash, mentoring, and a £250,000 marketing campaign with advertising at London Waterloo Station.

Richard Branson commented: “I love seeing entrepreneurs pitch an idea to me which they are incredibly passionate about and it was both a difficult and inspiring task to choose just two winners.

“All the finalists of the Virgin Media Business VOOM competition showed they have the dedication and intense desire to take their business to incredible heights and I believe they will all do so.”

News
Signed, sealed, and undelivered: 90% of shoppers admit to abandoning an online purchase
June 9, 2022
Back to Top