The UK’s start-up scene is continuing to gain momentum following new research which shows that demand for serviced office space has increased by almost a quarter (24.3%) over the last year.

The research, conducted by Officegenie.co.uk, surveyed the country’s 14 major cities and found that searches for flexible office space had risen fastest in Liverpool – up 44.5% on 2013.

Manchester was also reported to have seen a major surge in searches for start-up office space across 2014 with a rise of 43.6%; findings supported in the Startup Cities Index which highlighted Manchester as the number one city to start a business in outside of London.

Unsurprisingly, demand in London has also increased by more than a third (36%) in the past year despite businesses in the capital currently paying an average of £512 per desk per month in a serviced office – almost triple the cost of desk space in Liverpool.

This north-south divide was also highlighted in the cost of offices in Manchester which, although being the third most expensive city (£239 for desks per month), were still half the cost of a serviced office in the capital.

Stoke-on-Trent was the cheapest city for office space with desks available for an average of £175 per desk per month. 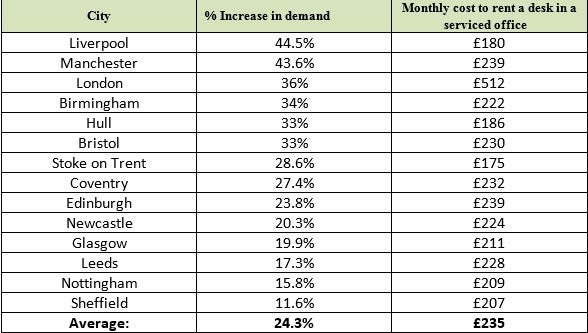 Peter Ames, head of strategy at Office Genie, said of the research:

“For years we have anticipated that the London business landscape will reach boiling point, and that demand will significantly outstrip supply. With the data showing more and more small businesses unable to cope with the inflated costs of the capital, and looking further afield for office space, perhaps we are now reaching this point of saturation.

“It’s our northern cities which seem to be taking the lead in tempting new businesses away from London, however. Conscious of a historical – and persisting – north-south divide, huge efforts have been dedicated to the regeneration of the places that were once the powerhouses of our industrial economy. Home to Oasis, the Halle Orchestra, Coronation Street, and more recently, the BBC, Manchester is drawing in entrepreneurs in high volumes – and so too is it’s north west rival, Liverpool.

“With an investment of more than £7bn to the north of England, as set out in the 2014 Autumn Statement, and London rents sky-rocketing, we could be seeing the beginnings of a start-up exodus to the north.”

News
Lockdown winners and losers
April 7, 2021
Back to Top
We use cookies. By browsing our site you agree to our use of cookies.