Having been recognised as a Growing Business Young Gun for his hugely successful calorie-burning SUMO drinks venture, Richard Baister is back with a new ‘miracle’ drinks start-up. Brainwave, which is currently available for pre-order, focuses on the mind rather than the body this time around – claiming to produce the world’s first soft drink that keeps the mind healthy and reduces the risk of Alzheimer’s and other forms of dementia.

The ‘Braintenance’ drink was developed in conjunction with scientists and contains several natural extracts including green tea, which research commissioned by Brainwave has shown to correlate with a reduced risk of cognitive decline. Having developed SUMO drinks into a national brand stocked in 850 stores, Baister is the perfect person to head up the Brainwave project and he has a strong advisory team already in place; Nik Hrstic, previously of Coca Cola is on board, as are previous Top Gun winners John Sinclair and Matt Miller of Ustwo. With several international export clients lined up already alongside a well-known UK high street retailer ahead of launch and a pledge to give 25% of profits to charity, Brainwave looks set to provide us with real food for thought. 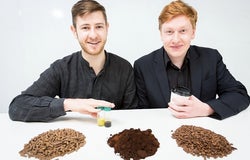