According to the December 2019 Business Statistics briefing paper from the House of Commons Library, there were 5.9 million private sector small and medium sized businesses in the UK in 2019.

Furthermore, the FSB states that in the UK’s private sector, small to medium sized businesses account for three-fifths of the employment and around half of the turnover. This goes to show the considerable impact that such businesses are having on the economy.

Yet with small business statistics in the UK spread across so many sources, how can you get a clear idea of the bigger picture? That’s where this page steps in…

Whether you’re looking to start a business yourself, or you’re interested in learning more about the sector, we’ve collated a wealth of online resources to bring you a comprehensive go-to resource for small business statistics in the UK.

In addition to the stats, we’ll look at businesses in Britain on a sector-by-sector basis, as well as surveying the financial landscape. We’ll also examine some of the main barriers to entry for new startups in the UK.

On this page, we’ll cover: 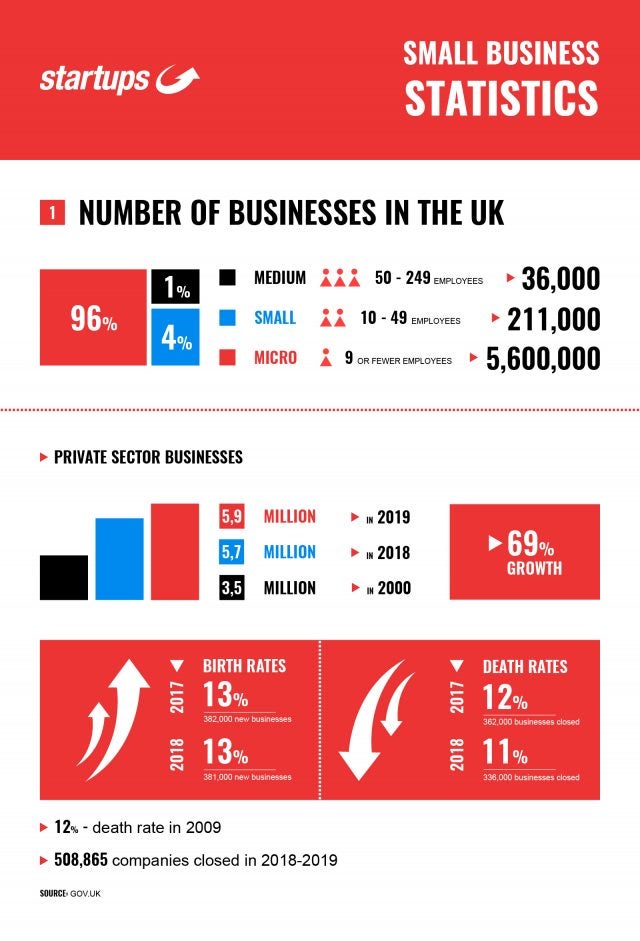 Number of businesses in the UK overall

More than 99% of all UK businesses are small to medium sized, meaning they have 250 or fewer employees. The country is also home to 8,000 large businesses, which have more than 250 employees.

Back in the year 2000, the overall number of private sector businesses in the UK stood at 3.5 million – meaning the country has since experienced an increase of 69%.

Number of new businesses in the UK

The Business Statistics briefing paper from the House of Commons Library refers to new businesses as ‘business births’. These are defined as businesses that were active and began trading in that reporting year, and are measured in proportion to the whole UK business population.

The same source refers to closed businesses as ‘business deaths’ – the proportion of active businesses that ceased trading in that reporting year.

September 2019 saw the collapse of the Thomas Cook travel agency – a major name on the British high street, which had been in business for 178 years.

This percentage was the highest rate recorded since 2009, when it also stood at 12%, then accounting for some 277,000 business deaths.

Of the UK’s 1.97 million corporate businesses, 45.7% of those are limited companies with one employee.

Between 2018 and 2019, approximately 9,000 businesses that were sole proprietors or partnerships became corporate businesses.

Corporate businesses as those that are companies or public corporations. 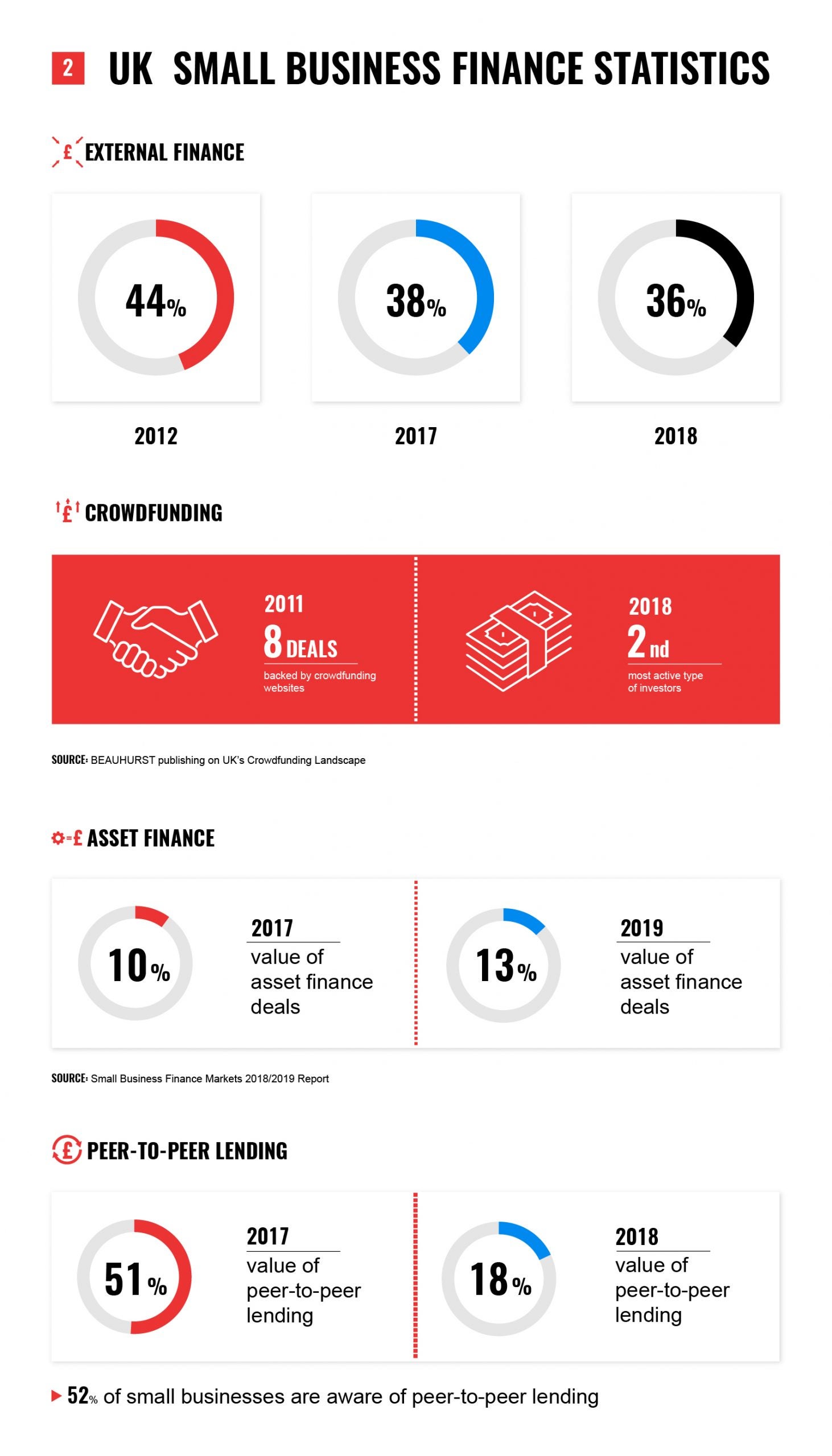 Finance can be categorised as either equity or debt. When looking at finance into UK business, it’s varied and interesting – the topic can span anything from funding to Brexit, or even the possibility of bootstrapping your business.

In the first half of 2018, one-third of businesses were happy to use external finance to support business growth. By Q4 2018, this proportion had decreased to 29%.

73% of businesses said they were prepared to experience slower growth, rather than borrow to aid quicker growth.

Here, we outline some of the key lending to small businesses statistics.

This type of finance refers to the process of borrowing money from a lender, with an agreement to repay it in its entirety (plus interest) either in one or multiple payments. With debt finance, you can keep shares and control of your business.

Interestingly, the number of approved overdrafts and new loans for SMEs has continued to decrease, according to EY’s The Future of SME Banking report from December 2018.

UK SMEs received £57bn of gross new funding in 2017, according to data published by UK Finance in its SME Finance in the UK: Past, Present and Future report.

Equity finance refers to the process of selling shares to raise capital.

According to data published by Beauhurst on the equity investment market, during Q3 2019 in the UK:

Venture capital (VC) is the process of investing funds from wealthy individuals via a portfolio that’s managed by a VC firm. Funds are invested into startups in return for equity.

According to data from private market data company Pitchbook, when looking at VC deals in the UK in 2017 based on the gender of the founding team:

In addition to equity and debt, there are other options to explore when financing a business in the UK.

Back in 2011, crowdfunding websites backed just eight deals in the UK. By 2018, however, crowdfunders had become the second most active type of investors in the country, according to data published by Beauhurst on the UK’s crowdfunding landscape.

The value of asset finance deals for smaller businesses has grown by 3% since 2017, according to the Small Business Finance Markets 2018/19 report published by the British Business Bank. In comparison, it was up 10% in 2017. 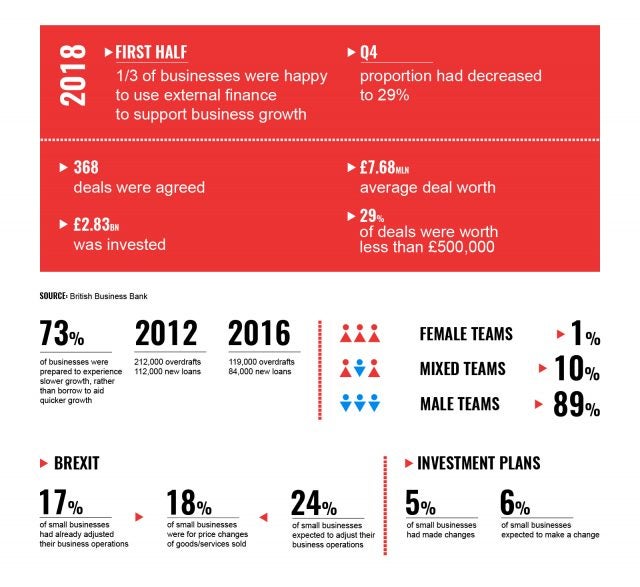 Between September and October 2018, the British Business Bank conducted its SME Finance Survey.

Of those who had made, or expected to make, changes, 18% were for price changes of goods/services sold. When looking at investment plans, 5% had made changes, while 6% expected to make changes.

UK residents aged 65 and above accounted for 18% of the population in 2016. This is a marked increase from back in 1991, when this demographic represented 15.8% of the population. With this data from the ONS showing that the percentage of the UK population aged 65+ is growing year on year, it could be an ideal time to launch a service-based business that caters to this audience, such as smart tech to help the elderly.

The beauty industry could also be a potentially lucrative area to explore for entrepreneurial ventures, such as an eco beauty business. The British Beauty Council recently published its Value of Beauty report, which documented that the UK beauty sector was valued at £27.2bn in 2018. Furthermore, according to J. Walter Thompson Intelligence, 83% of consumers said they would choose a brand with a positive reputation for sustainability.

In this section, we highlight some of the biggest barriers to entry when starting a business in the UK. This is based on our own internal data of 3,000+ responses, collected on the Startups.co.uk website between September 2019 and the end of October 2019.

Based on our audience polling, the main barriers to entry are: 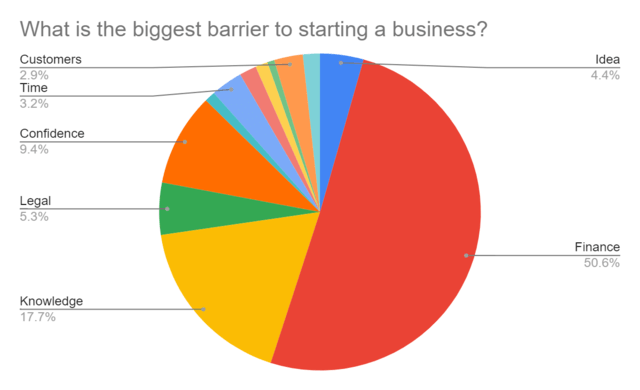 Access to finance was the most overwhelming barrier according to those that responded.

The Alison Rose Review of Female Entrepreneurship highlighted how female entrepreneurs feel less able to access finance than men. Indeed, businesses led by women accessed less funding than those led by men throughout the different stages of funding.

Next came knowledge, referring to the skills, experience, or qualifications that are required to run your own business. Meanwhile, a fear of failure made confidence the third biggest barrier.

Having highlighted how significant small businesses are to the UK and its economy, we’re excited to see even more startups launch onto the scene in 2020.

While the bank may be the first port of call for many business owners, when it comes to funding, there are a wealth of options to explore. These include tried-and-tested methods like external finance and equity, along with more unconventional financing from crowdfunding and peer-to-peer lending.

Although Brexit may be the subject of the moment, in small business circles, the UK’s break from the EU hasn’t been a cause for much change, although that may change depending on the political climate.

With an ageing population, along with a valuable beauty industry and an increased focus on sustainability, we’ve offered ‘smart tech for the elderly’ and ‘eco beauty’ as two business trends to tap into in 2020. For more inspiration, check out our Business Ideas 2020 feature!

We’ve compiled the most compelling facts and figures from UK small business sources as part of our quest to create a unique resource that traverses the British startup landscape. As part of that, we polled our readers ourselves to see what matters the most to you.

From this, we found that finance was the biggest barrier to entry for people starting businesses, while selling to/serving customers only concerned a handful of budding entrepreneurs.

Taking these findings into consideration, and with Brexit finally set to occur this year, let’s see what 2020 brings for startups in the UK! 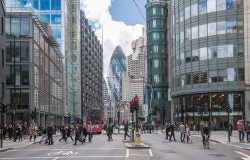 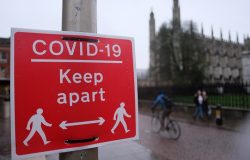 Analysis
How could Omicron impact your small business?
December 7, 2021 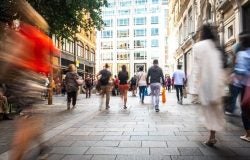 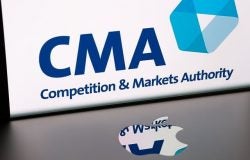 Analysis
What is the Competition and Markets Authority – and why should you care
July 30, 2021
Back to Top