Tavern, boozer, rub-a-dub or just ‘the local’ – whatever you call yours, the humble public house is often cited as a quintessential icon of British culture.

But are they in danger? Earlier this month came the news that UK pubs are now at the lowest number ever recorded. The nation’s pub numbers fell to just 39,970 in June – a 42% decrease since 1980.

COVID-19, Brexit, and record-high inflation rates have all taken a share of blame – truly, the industry’s cup runneth over with operational and cash flow challenges. Last year, sales in pubs and pub restaurants were down an average of 8.5% from 2019.

So how are pub owners coping? What measures can they take to improve sales figures?

We spoke to various industry faces, including Wetherspoons tycoon Tim Martin, to get their thoughts on the challenges facing today’s businesses and the place of the local pub in 2022.

Pubs were among the most high profile businesses forced to close when COVID-19 safety measures were introduced. Staff were furloughed, and many took out Coronavirus Business Interruption Loans (CBILs). Even with these government measures, the impact on business owners was catastrophic.

By February 2021, the percentage of pub managers saying they were ‘highly confident’ about the survival of their business had dropped to just 1%.

“Lockdowns and restrictions have been devastating for many companies,” Martin tells Startups. “Now that the precedent of locking down has been set, there is a danger that they will be reintroduced in the future.”

Matt Harris is the owner of a bar in the City of London, Fox Fine Wines and Spirits, and his experience over the past couple of years has been gruelling.

“COVID-19 was absolutely atrocious,” he bristles. “I had several mental breakdowns, we lost two of our bars, and our business halved, yet my landlords demanded every penny from the start of the pandemic.”

Harris was forced to close two other bars as a result of the COVID-19 pandemic. The decision to take last orders was not an easy one, but Harris is far from alone. 54% of hospitality businesses were at least temporarily closed in the early 2021 lockdown, while turnover hovered at around 25% lower than in 2019.

The memory of this difficult period is also affecting growth plans. Should Harris open another bar in the future, he’s keeping his sights firmly locked on a space in a residential area in case of a return of lockdown safety measures.

“People aren’t feeling more optimistic. If my business is devoted to office and business workers, I don’t have any fallback position once people start working from home,” he explains.

Alongside concerns about future lockdowns, the COVID-19 legacy includes a substantial talent shortage for small businesses.

Hiring has become a major issue across almost all sectors as a result of the ‘great resignation’ post-COVID. However, ONS figures indicate that accommodation and food service activities experienced the largest increase in vacancies between April and June this year. The number of available jobs rose to 175,000 in total.

Victims include Mark Hix, famed restaurateur, chef and food writer for The Telegraph. Hix opened the Fox Inn, a pub in Dorset, in January 2021. After just 18 months of trading, the business closed earlier this month.

Hix blamed “a difficulty to recruit like I have never known in my whole career”, as the catalyst for the closure.

Many critics have pointed to Brexit as another cause for the drop. Almost 100,000 EU nationals left accommodation and food services in the two years to June 2021 — the highest of any industry.

Harris reports that Fox Fine Wines was “somewhat lucky because we had the pick of the staff left from the bars we closed. [But] staffing issues are still a huge problem because of Brexit”.

The consumer price index (CPI) inflation soared to 9.4% in June. Rising costs across the supply chain have resulted in businesses passing on price hikes to consumers at a time when trading is still returning to normal.

Tax inequality is the sword of Damocles over the pub industry.

Exacerbating this issue is the spike in fuel and energy costs. Currently, the energy price cap by Ofgem only applies to UK households, not businesses.

That means bar and pub owners, who have to pay for assets like fridges and air conditioning, have seen their energy prices go through the roof.

“It’s really difficult at the moment because everyone is aware of prices going up”, says Harris. “We’ve had to do that to protect our margins. [Consumers] think you’re doing it to make money, but even with higher prices, businesses are making the same as before.”

Food-led hospitality firms also have to contend with higher taxes compared to other business models. Supermarkets currently pay no VAT on food sales. Meanwhile the rate for the leisure and hospitality sector has returned to 20% after being temporarily reduced in July 2020.

Tim Martin tells us that this ‘tax inequality’ is the main reason for declining pub numbers, as it allows supermarkets to subsidise the price they sell to customers.

“Tax inequality is the sword of Damocles over the pub industry,” Martin states. “The situation is crazy. Tesco probably makes several times the profit of the entire hospitality industry, yet pubs subsidise supermarkets’ tax.

“40 years ago pubs had 90% of the beer market, today it’s a lot less than 50% and is still falling. Unless the inequality is ended, pubs can only mount, in effect, a rearguard action.”

In a June survey of 201 hospitality decision-makers by Peckwater Brands, 79% said that restoring hospitality VAT to pre-pandemic levels should have been delayed for at least 12 months.

This government has been a complete waste of time.

Business leaders have lamented the lack of support for SMEs – in the face of these tax discrepancies and unprecedented inflationary pressures.

Despite a spring statement and an emergency budget announcement, ex-chancellor Rishi Sunak has kept mum on the issue of financial support for SMEs.

“This government has made life difficult with Brexit, with tax bands, they’ve been a complete waste of time,” says Harris.

“As hospitality businesses, we have lost the last two Christmases. We’ve been on backwards footing from the start. We’re surviving through our own resourcefulness, not through any help from the government.”

Consumers lower budgets for ‘going out’

Pubs are often described as sitting at the heart of UK towns and villages. They improve community engagement and are a popular activity amongst foreign and local tourists.

“The pub is the hub,” Tim Martin tells Startups. “Life is very dull if there are no pubs. I stayed in a town in Sweden once and had to go to the local golf club for a sherbet. And I don’t play golf.”

But do consumers see their local pub in the same, romantic way? Undoubtedly, pub-goer habits have shifted over recent years.

Partly, this is age related. According to the alcohol education charity Drinkaware there has been a general decline in drinking: older people are still most likely to drink, while 26% of people aged 16 to 24 are now fully teetotal.

But as Harris points out, the switch also sits alongside a wider cultural phenomenon of society’s changing attitudes towards drinking recreationally.

“I think there are a lot less people having a drink during the day,” he affirms. “Lots more companies, regardless of whether you live in a residential or office area, aren’t approving of a drink over lunch. The majority of customers are only going out in the evening.” 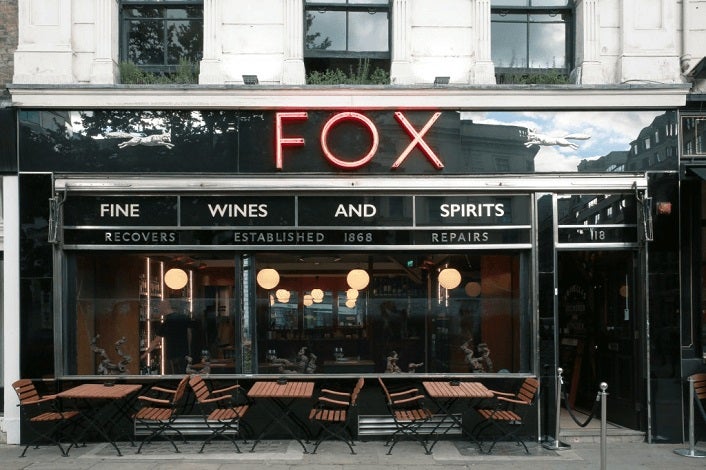 Money is another motivating factor. As the cost of living crisis rises, we reported last month that a third of customers are cutting back on bar and restaurant spending as a way to save.

It’s a problem that Alison Boutoille, co-founder of retailer CityStack, is sympathetic to. “With the current record inflation rate, consumers remain reluctant to budget for going out,” she acknowledges.

Boutoille designed CityStack to support independent pubs during the COVID-19 crisis. Buyers are given a pack of ten specially-designed coasters, which can be exchanged for discounts at ten specialist London pubs.

“It is a collection that allows [customers] to discover and support a selection of great independent pubs whilst saving money.”

While the past decade has been a dark time for hospitality businesses, the future is at least a bit brighter for those that are reacting cunningly to the challenge ahead.

Fox Fine Wines has pivoted its business model to encourage more daytime consumers who may be hosting everything from corporate wine tasting events to trade shows.

“We’re working a lot more on confirmed corporate events, using our base for coffees, lunches, and meetings,” he reveals.

He points to examples from his own business for ideas that have come from “the frontline”, such as Au vodka, Lavazza coffee, and free shares for staff. “Listen is the key word,” he counsels.

“We’ve tried to stay ahead of the game in environmentally friendly initiatives such as recycling, while trying to stay within the realms of common sense,” says Martin.

Common sense might also dictate that the government provide financial support to the hospitality sector as it deals with a significant tax burden under the shadow of stagflation – but that remains to be seen.

For now, entrepreneurs interested in advice on running a pub can read our guide for more about ways to save costs when getting started.