Some say that necessity is the mother of invention. But here at Startups, we think that title actually belongs to Spice Kitchen co-founder, Shashi Aggarwal.

Having grown bored with retirement in 2012, Shashi decided to start the successful artisanal spice and tea company, with her son, Sanjay.

It might sound like a recipe for disaster. After all, business decisions can be difficult enough without adding a sibling or parent into the mix.

But Shashi and Sanjay’s dynamic has seen their kitchen-table startup grow from humble roots in Walsall, to delivering handmade spice products to customers around the world.

Hardly surprising, as our Startups Cities Index 2022 found that the Midlands is one of the best places for business support.

Ahead of Mother’s Day, we sat down with them both to chat more about their business journey, and the challenges of navigating such a close personal and business relationship.

Successful entrepreneurs know that a strong brand story is about finding the beating heart of your business. Spice Kitchen’s identity has been shaped naturally – born out of Shashi’s passion for cooking.

Having previously owned a small, but popular, retail shop in Birmingham with her husband, Shashi wanted to find a new hobby. As a result, she pitched the idea to the rest of the Aggarwal family on Christmas Day 2011.

Sashi recalls, “I said, ‘I want to do a little project, which I can just use to keep myself occupied’. Sanjay came up with this idea that I do something with spices, because I’ve always loved cooking.’”

Cooking is a skill that runs in the family – Sanjay remembers much of his childhood as being spent in the kitchen, trialling new recipes with his siblings.

“Obviously, Mum's got a business background which helped. We've always had a working relationship as well as a personal relationship,” Sanjay says. “But the other reason we've been really successful is that Mum is an amazing chef. She's instilled it in me, my brother and sister from a very, very young age.”

But that’s not all. Not only is Shashi a talented chef, she’s also an expert seamstress – another big influence on Spice Kitchen’s unique packaging.

“The business has very much been created around Mum’s skills,” Sanjay nods. “Mum’s an expert spice maker and an incredible sewer. That's what customers absolutely love.” 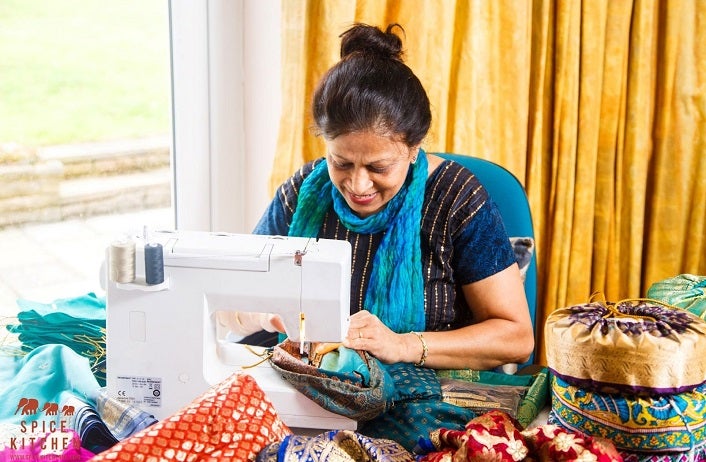 At one early trade show, Shashi wrapped a handmade sari around one of the display units. “Everybody immediately said, ‘can we have your display?’ she laughs. “And the idea just grew.”

Every Spice Kitchen tin now comes wrapped in a homemade sari, and Shashi works with different suppliers to get them made. Despite taking a step away from Spice Kitchen to let Sanjay take over, she still remains a big presence within the brand.

“I've obviously given it a commercial push,” Sanjay says humbly, “like emails and online and e-commerce and everything else you need for a business to function. But essentially when it comes to improving our product, there's no one better than Mum.”

How do you start an ecommerce business?

The Spice Kitchen website shows the many ways an online store can help to boost your business’s profile and sales figures. Learn more about how to start an online shop in our complete guide.

Authenticity is an important ingredient in Spice Kitchen’s business model. Even now, Shashi still does the initial testing for all of the business’s new blends in the family kitchen.

Some, like the garam masala, curry powders and tandoori masala began as family recipes, passed down for generations. But they now sit alongside an expansive range of international spices, developed in consultation with experts from each region.

“When it came to making North African blends or jerk blends, we've either consulted with chefs or we've found a local person within that country who knows the blend,” says Sanjay. “And then we've tweaked it a little bit to make it our own.”

The business has very much been created around Mum’s skills.

At first, it was just Shashi running the kitchen and selling a few products on eBay. Then, more and more orders began to roll in.

“We kept it in my own house for the first few years, but then it was getting ridiculous,” Shashi tells Startups. “We were working day and night trying to fulfil the orders. That’s when we decided to get Sanjay onboard.”

Self-employed since he was 24, Sanjay was already the owner of a thriving recruitment business. But he quickly saw that Spice Kitchen had potential, and began looking at how to take the business wholesale.

“I got super excited,” grins Sanjay. “And then we quickly realised that we needed barcodes, we needed compliance, we needed food safety and a whole list of things.”

But despite this setback, retailers continued to knock at the kitchen door. Sanjay convinced his Mum to attend five trade shows – a big gamble, and one with a sizable price tag. 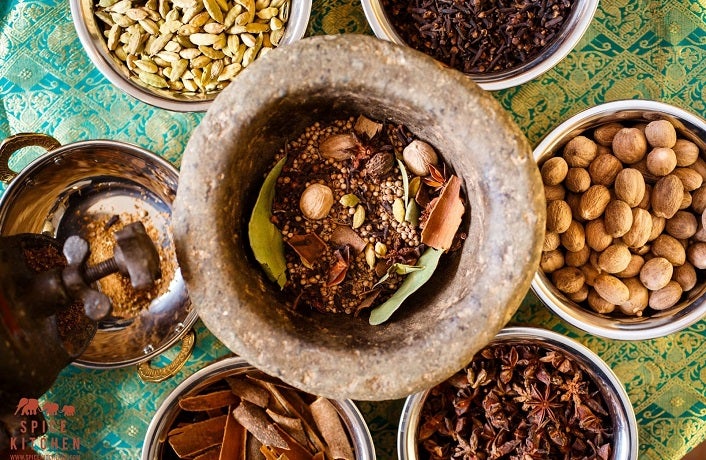 Luckily, the risk paid off. Sanjay came out of the trade show and realised that his Mum’s idea had legs. “I called my clients,” he recounts, “and said, ‘listen, I'm not recruiting anymore’.”

Spice Kitchen is currently sold by around 450 retailers across the UK and Ireland, and Dubai. Their products have won Gift of the Year, and Shashi even appeared on BBC’s The Hairy Bikers in 2017.

The firm’s success is impossible to argue with. And while it must be strange for a parent to watch their child shoulder such a huge responsibility, Shashi’s pride is obvious.

“I never thought he could achieve what he's already achieved in the last five years,” Shashi says. “I didn't know initially that he had that in him. I always thought he was talented. But I had a small business out of the kitchen, and look at where he's taken it.”

It’s clear from chatting to both business owners that they have a strong working relationship. But there are also clear differences in their roles.

Shashi is the chef, the architect. But Sanjay is the wayfinder. He takes care of the more practical aspects, like business meetings and working with retailers. As well as this, he oversees Spice Kitchen’s five-person management team – learning how to manage projects as he goes.

“Over the last three or four or five years, the business has kind of evolved past any of our knowledge,” Sanjay explains. “We're doing things on a much bigger scale [which] requires a certain level of risk and strategy.”

I came out of that trade show thinking, wow, this business has got legs

Because of this difference in preferred tactics, the two have clashed at times. But Sanjay’s obvious entrepreneurial knack seems to have now won out.

“I let him take the risk,” Shashi says. “I let him face the consequences and learn from his mistakes. If I kept on saying, ‘well, it was my business and it's got to be done my way all the time’ – that’s when all family businesses fall apart. I'm happy to stay back.”

Another rule that both Mother and Son adhere to is distance. Shashi rarely visits the 4,000 square-foot office unit that Spice Kitchen purchased last year, explaining it’s better the two don’t get ‘under each other’s feet’.

In fact, if there have been any spills in the making of Spice Kitchen, they’ve mostly been down to generational differences. “He has a young person’s enthusiasm,” Shashi smiles.

There might be family members reading this article, Startups tells Sanjay and Shashi, who are thinking of going into business together. What kind of advice do the duo have, given the triumph of their own venture?

“Communication is crucial,” Shashi states. “If you have a problem, just discuss it with them. Don't let yourself sit there in silence. Talk to each other and say, ‘look, we do this, or yes, I can help you wherever I am’.”

Spice Kitchen might boast two talented co-founders and a compelling brand story. But it’s still the company’s tasty blends which Sanjay credits for the business’s success.

“I would say for me the best thing about Spice Kitchen is seeing Mum's talent shown for the first time. People love the quality of the spices that they buy from us,” he says.

Brand loyalty is particularly important in the food industry. It’s a competitive sector that can be hard to stand out in – as both founders know only too well.

“Customer service is really key for us,” Sanjay acknowledges. “If you have a bad product that doesn't taste very good, you can have all the branding in the world, but people just won’t buy it.”

At the moment, customers are mostly discovering the brand as a gift option. But Shashi and Sanjay are aiming high. They want Spice Kitchen’s spice blends to become a household staple, and are also looking at how to break into the North Europe market.

That being said, when it comes to product development, the house kitchen in Walsall is still the business’s main laboratory. Their legacy is very firmly a family one.

The best thing about Spice Kitchen is seeing Mum's talent shown for the first time.

“Mum has instilled that level of passion for food in all of us. Now my daughter, for example, is a really big foodie,” says Sanjay.

So what’s next for Sanjay and Shashi? The company has again been nominated for Gift of the Year 2022, after winning in 2019. Sanjay and Shashi Aggarwal are also working with BT on its Skills for Tomorrow programme, sharing their top tips for launching a business online.

Shashi will also be overseeing the publishing of a Spice Kitchen cookbook, hoping to join the prestigious rankings of the best business books.

Once published, the firm will be sharing the recipes for their delicious blends with the world. Both founders talk enthusiastically about their plans for the book and the work they’ve done so far – their commitment is obvious.

“We are such a passion business,” Sanjay says. “A lot of people I see are running businesses where they're not really that passionate about the business. We absolutely love what we do. We love the product.”

One thing is for sure, if Spice Kitchen’s success is anything to go by, everyone and their mothers will be starting a business. We doubt they’ll find a partnership like this one, though.

“It's funny actually,” Sanjay tells Startups. “Lots of people come up to me and say, ‘wow, you run a business with your Mum, I could never do that’ because they just don't see that sort of relationship with their Mum. I know that's something special that we have.” 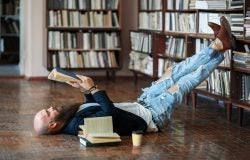 News
Top 5 business books entrepreneurs should be reading on World Book Day 2022
March 3, 2022
Back to Top