Name: Rohan Silva
Business: Silva co-founded Second Home. A members-club-style workspace for entrepreneurs and start-ups in Spitalfields which has attracted over 30 investors and nearly $11m funding.
Why you should know about him: A former senior policy advisor to David Cameron and special adviser to George Osborne, Silva is credited as the brains behind the Tech City project which aimed to put London on the world’s technology map and further support the growth of the technology cluster in east London. Indeed, some of the most progressive pieces of government policy in recent years including open data, a commitment to aid spending, the Big Society and the national Life Science Strategy bear his imprint.

He’s formerly one of the brightest thinkers in Downing Street and now a successful entrepreneur, which is why we’ve compiled five facts to help you get to know him better…

1. He wasn’t always an entrepreneur

Before working in politics and founding his start-up, Silva originally worked for the Treasury as a civil servant on the Fast Stream Programme, a public sector scheme for gifted individuals. He ranks introducing behavioural economics into British policymaking among his highest ever achievements.

However, Silva found the bureaucratic nature of the civil service frustrating and took an instant dislike to how red tape would often stall ideas. After 18 months, he was spotted by then shadow chancellor George Osborne who invited him for coffee. Following this meeting, he was offered a job formulating the Conservatives' technology strategy while still in opposition.

In between quitting Downing Street and founding Second Home, Silva took up a post as entrepreneur-in-residence at Index Ventures.

Now, he well and truly has the entrepreneurial bug and wants more politicians and people who have worked in government to start their own enterprise, saying in an interview: ”I hope a lot of people leave government and start businesses. I think that would be cool.”

He won a scholarship to Queen Elizabeth Grammar, a local independent boys school, before studying law at Manchester University. However, Silva admits he found studying law ‘boring’ and preferred the social elements of university and life. He told the Financial Times, “It’s odd. I really, really love learning but I can’t stand being in school.”

Key to Silva’s success had been his ability to build up an extensive list of high profile contacts, and he’s certainly used them to his advantage. Following a meeting in Google’s headquarters, Silva convinced then Google CEO Eric Schmidt to set up a Campus, a start-up space near Old Street roundabout.

Having met Matt Webb, founder of Berg, on a plane to India, Silva persuaded him to get involved in influencing policy around ‘silicon roundabout’. Indeed, Sir Richard Rodgers, Brent Hoberman, Jim O'Neil and even Lord Heseltine are among his supporters.

This success, and his persuasive personality charmed his now wife Kate McTiernan. The Australian architect was in London for two days when she met Silva at a dinner party. Having stayed up two nights talking about Silva’s ideas, McTiernan said she “fell completely in love with him” and the couple now live together in Clerkenwell.

In contrast to his confident persona, Silva has admitted he often feels displaced, despite being a first-generation Briton. Born in Wakefield, West Yorkshire, Silva is the son of a Sri Lankan couple who moved to England for work in the 1960s. His father was a dentistry lecturer at the University of Leeds while his mother was a teacher, but later retrained as an accountant.

He also attributes his feelings of otherness to being a northerner living in the south.

While he previously worked alongside the Conservative Party, Silva has said he's ‘‘non-tribal’’ when it comes to political affiliations too.

Alongside his business partner Sam Aldenton, Silva announced plans to open an 830 square ft. “experimental’’ independent book shop located on Brick Lane in East London. According to The Bookseller, a house bar, DJ turntables and an in-house printing press will be just some of features available to its customers and it will offer 5,000–6,000 titles over two floors with some books even being printed on-site.

While it was said to open in December, we can't see signs of it being up and running just yet, but watch this space. Silva has ambitious plans for the venture, hoping to open another bookshop in a different city next year if the business is successful.

Second Home has also secured further investment to expand overseas, with plans to launch in Lisbon later this year. 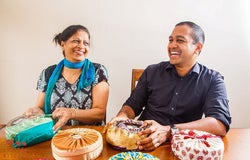 Successful entrepreneurs' stories
Just a Mother’s Day at the office: How to run a successful business with your Mum
March 25, 2022
Back to Top