But this ‘punk’ brewery was born out of a simple mission: founders James Watt and Martin Dickie wanted to make people as passionate about craft beer as they are. Moreover, they wanted to offer alternatives to the industrially brewed beers that dominated the market back in their founding year, 2007.

This mission has underpinned the business all the way from the start — when the founders were brewing in one of their mother’s garages — to today, with Brewdog now being a multinational brewery and pub chain valued at $2 billion (£1.53 billion).

With their ‘Punk IPA’ beer often thought of as the catalyst of today’s UK craft beer movement (or punk-style ‘revolution’), Brewdog has had an undeniably disruptive impact on the beer industry. It’s responsible for several ‘firsts’ in this space, the best known being the radical move to allow beer-drinking fans to buy shares of the company online, which has led to Brewdog breaking the world record for equity crowdfunding.

CSR has also played an integral part in getting Brewdog to where it is today; the brewery’s commitment to sustainable business practices has recently led it to becoming the first carbon-neutral brewery in the entire world.

Despite being held responsible for the downfall of Western civilisation in just their second year of brewing, it seems we can expect some wholesome and impactful initiatives from Brewdog moving forward.

Why we chose Brewdog as one of the Startups 20

Brewdog’s intrigue and record-breaking growth have prompted several appearances on Startups over the years which mark just a few of the business’s countless milestones. It was first featured in position #22 of the Startups 100 list as one of the UK’s fastest growing startups in 2010. A year later, it was labelled “Scotland's largest independent brewery” as part of the Startups Young Guns Awards, for which it won the Golden Gun award in 2015.

The rate and scale of its expansion is one of the most impressive things about Brewdog. It managed to grow by 200% in only its third year during the severe 2009 recession, broke the world record for the most consecutive years in the Sunday Times Fast Track 100 (now eight successive years), and went from zero-to-unicorn within a decade.

Putting the numbers aside, innovation and disruption are concepts this company truly grabs by the horns, and Watt and Dickie have hardly been shy about wanting to “revolutionise the British beer industry” with their ‘punk’ beers. Brewdog has created the world’s strongest brewed beer at 57.8% ABV, opened the world’s first ‘beer hotel’, brewed beer at the bottom of the ocean, and served beer in the taxidermy carcases of roadkill animals. All in the name of helping people appreciate beer in a way they hadn’t before.

Finally, Brewdog has shown a strong commitment to doing good. The founders claim their Unicorn Fund, which donates 10% of yearly profits to their crew and 10% to charities, is the “new blueprint for 21st Century business”. More recently, their commitment to minimising their impact on the planet has inspired them to plant a ‘Brewdog forest’ over 2,050 acres of land near Loch Lomond, Scotland. 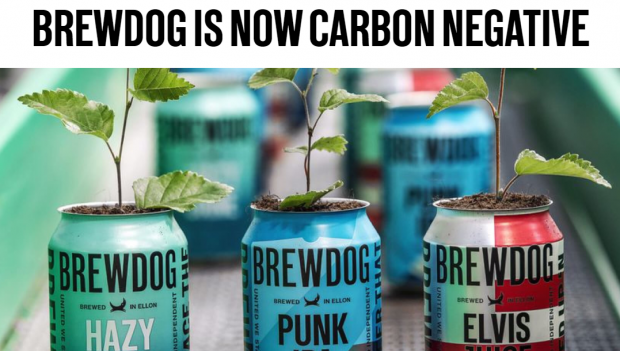 Despite the dizzy heights of unicorn-dom that Brewdog has reached, it’s not been immune to the effects of COVID-19. The company allegedly lost 70% of its revenue overnight when the virus hit, and made a loss of £8.1 million in the first six months of the year. But it hasn’t been all doom and gloom, with the company still having managed to offer philanthropic aid in 2020.

In May, the business launched its Brewdog Kickstart Collective, aimed at helping small beer-selling businesses recover from the first lockdown. The scheme was open to 500 businesses who would receive free Brewdog beer to restock their shelves, as well as expert advice from certified beer sommeliers.

And in reaction to a national shortage of hand sanitizer, Brewdog started making its own in its Aberdeen distillery, and has donated tens of thousands of units to the NHS and local charities.

In further positive news, Brewdog made the big announcement in August 2020 that it is now a carbon negative company (the first brewery in the world to achieve this feat), and disclosed several new sustainability initiatives which fans can support and invest in with the latest round of equity fundraising: Equity for Punks Tomorrow.

Brewdog’s founders have spoken publicly of how their forestation project is a long-term commitment, which will be an integral part of who they are as a business for as long as they exist. The plan is to have planted more than 1 million trees by 2022.

But we can be sure that the dedication to reducing the business’s carbon footprint as part of the “Make Earth Great Again” scheme will be taken much further. After announcing that all Brewdog beers were made using clean wind-turbine energy in July 2020, co-founder Watt stated that the company was “on a mission to be the world’s most sustainable drinks company”.

How will they manage it? From what we know today, it seems that electric delivery vehicles, anaerobic digesters (that turns wastewater into pure water), and zero-waste initiatives are the answer.

Oh, and in classic Brewdog style, the business is making sure they remain at the forefront of beer-drinkers’ minds with its next smart publicity stunt. The company has stated that the impacts of COVID-19 have encouraged them to “fast-track our next 12 months of beery innovations” by asking for help from fans to reshape their product range.

It seems whatever the future holds for Brewdog, they’ll strive to stay original, disruptive, and ‘punk’ til the end.

Robyn joined Startups in 2019, bringing with her first-hand experience of working in Berlin’s startup scene. As the site’s ‘Grow Online’ Editor, she uses her digital marketing expertise to commission and optimise content that empowers small businesses to improve their online presence and realise their full ecommerce potential. From website building to social media management - she has all the channels for digital growth covered.