In 2015, Hayden Wood, a management consultant who worked with the Big Six, and Amit Gudka, a trader on the wholesale energy markets, were well placed to spot some major flaws in the energy market.

Prices were high, customer service was poor, and although many consumers were keen to switch to renewables, it was expensive – and there was no easy way to do it, either.

They knew they could make energy simpler, cheaper, and greener. So they started Bulb – the 100% renewable electricity and 100% carbon neutral gas supplier.

It didn’t take long for Wood and Gudka to be vindicated – Bulb racked up tens of thousands of customers within a year of launch, and that figure has grown and grown ever since. Today, the energy startup has 1.7 million customers, accounting for around 6% of the whole UK energy market.

It’s not hard to see why the startup found such rapid success. It takes just two minutes to switch to Bulb online, and with only one variable, reasonably-priced tariff, there’s no need for you to worry that you’re not getting a good deal. What’s more, you’re not locked into a contract, and you aren’t charged exit fees if you leave.

It’s a compelling proposition: save money and save the planet. What’s not to love?

Why we chose Bulb as one of the Startups 20 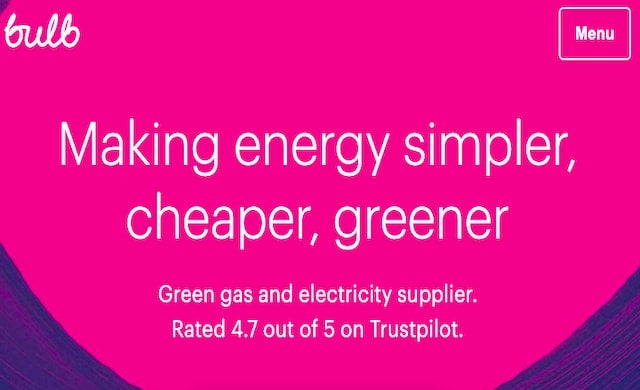 Over the last few years, few businesses have been as lauded as Bulb on the pages of Startups.co.uk – and with good reason.

Back in 2016 – when Bulb had its Startups debut in our Just Started feature – Wood and Gudka told us that, in five years' time: “We want to have democratised renewable energy… We want to provide an example to energy suppliers all over the world that there's a better way to provide energy.”

Along the way, Bulb’s racked up two appearances in the Startups 100 (including the coveted number one spot), earned the founders a place in our Young Guns index, and won The Start Up Loans Startup of the Year award at the Startups Awards 2017.

Why is it so highly commended?

Well, in a market dominated by a handful of large, established companies, Bulb has taken on the Big Six and achieved exactly what it set out to do: to make it easy for consumers to power their homes and businesses with affordable, 100% renewable energy. In fact, in 2019, 15% of all energy supplier switches were to Bulb.

This is thanks in no small part to its super successful referral programme, which offers members credit on their account if they refer a friend or family member. Customers are clearly happy: some have made enough referrals to reduce their energy bills by four times.

That’s what every startup should be aiming for. It’s disrupted a stale industry, it’s giving consumers better value, and best of all, it’s doing it in an environmentally-friendly way.

2020 has been a big year for Bulb. As of October, the company has a team of 800 people, having welcomed an additional 200 (mostly remote) team members in the last few months alone. And it’s now fully launched in three international markets – Spain, France, and Texas – in what it has described as just “the first wave” of Bulb international.

Thankfully, the pandemic hasn’t had too much of an impact on Bulb, which quickly put in place measures to look after its staff and its members. It’s also found time to provide extra support for any vulnerable or self-isolating customers, and implemented a new chat platform that makes it even easier for members to contact the company.

2020 has also seen something of a sea change in the energy industry. In June and July alone, 400,000 people in the UK switched from a big energy supplier to a smaller, greener supplier – a 25% increase on the number of consumers that did so in the same period last year. They didn’t all join Bulb, but as one of the biggest small suppliers, Bulb is in prime position to capitalise on this ongoing trend.

You’ll be glad to hear that Bulb has some ambitious plans for the future.

It’ll soon be launching a host of new products to help its customers manage their energy more effectively, including a Smart Pay As You Go Tariff, making it the only big energy company to offer Smart PAYG with 100% renewable electricity and 100% carbon neutral gas.

And it has a big target…

“Our mission is to have 100 million members by 2030, providing as many people as possible with simpler, cheaper, greener energy. What we’re trying to do hasn’t changed since the early days of the business but, as we’ve grown, the scale of our ambition has. We’re focussed on scaling our business internationally, bringing Bulb to people around the world.”