After a family holiday gone wrong, Justine Roberts wished that she could have communicated with other parents and asked for advice before jetting off.

This desire proved to be the foundation for Mumsnet, which was founded in 2000 to help parents and parents-to-be seek advice on all things parenting-related – and more.

Roberts launched the business with co-founder Carolyn Longton, with the pair having met two years earlier at antenatal classes. Before starting up, Roberts was a sports writer for newspapers, while Longton was a TV producer.

Roberts: “When I conceived the idea for Mumsnet,  I really didn’t imagine I’d still be doing it 20 years on. It's amazing to look back at the last 20 years and see how much has changed. When we launched Facebook and Twitter didn't exist, nor did smartphones, and people had to be persuaded that this internet thing might have legs.

“I think the fact that we’re still around is a test of resilience as much as anything – it took six years to get to a business model that generated anything more than pocket change – so I’m proud that we hung in there and grateful to many people for a lot of support during the tough times.”

Mumsnet has since become the network for parents in the UK. The now-famous AIBU (Am I Being Unreasonable?) thread was started in 2007, and has since amassed more than 6,800 pages!

But it was in 2010 that Mumsnet’s influence truly peaked. David Cameron, Gordon Brown, and Nick Clegg each took part in live web chats with Mumsnet users in 2008, 2009, and 2010 respectively, in the run-up to that year’s general election – with some media outlets even dubbing it the ‘Mumsnet’ election.

2011 saw the company expand and launch the Gransnet site, aimed specifically at grandparents and people aged 50+. And in 2013, Gransnet launched a local directory service for the site after receiving funding from the then-named Nominet Trust (now called the Social Tech Trust).

Mumsnet spent the early 2010s developing its offline offering, such as by providing training conferences through the Mumsnet Academy, along with hosting its BlogFest and Workfest conferences.

Mumsnet has steadily become an authority on marketing to mothers, including a 2017 report with Saatchi & Saatchi London on this topic. And in 2018, the company worked in consultation with fast food giant McDonald's to help make its iconic Happy Meals healthier.

Why we chose Mumsnet as one of the Startups 20

From starting up until now, Mumsnet has had a colossal impact, both in its own sector and further afield.

For example, its contributions to publishing have been recognised not once but two times, having won the Online Comment Site of the Year at the Editorial Intelligence Comment Awards in 2011 and 2014.

But Mumsnet’s impact also goes far beyond its own website. It has started and supported a number of campaigns, including ‘Miscarriage Care’, which contributed to the renaming of an entire surgical procedure.

And its ‘Let girls be girls’ and ‘Lads’ mags: out of children’s sight’ campaigns received support from major UK retailers, including Sainsbury’s and Tesco.

As well as this, Mumsnet partnered with the Breakthrough Breast Cancer charity to run the ‘C Word’ campaign in 2010.

This aimed to raise awareness about breast, cervical, and ovarian cancers, with experts answering questions from Mumsnetters (a term for the site’s users, which even has an entry in the dictionary).

Over the years, Mumsnet has become an authority in its own right – the company now runs the Mumsnet Best and Rated awards, offering brands a seal of approval from parents and users respectively. Winning products are able to display the relevant badges in their marketing through its licencing options.

The company’s leadership has been recognised on many occasions too, with Roberts receiving a number of accolades throughout the years.

She was the recipient of the Institute of Internal Communication Communicator of the Year award in 2014, as well as the EY Entrepreneur of the Year London and South award in 2016, and served as a judge for our Startups Awards in 2018.

But Roberts' status as a game-changer was royally cemented in 2017, when she was awarded a CBE for services to the economy. 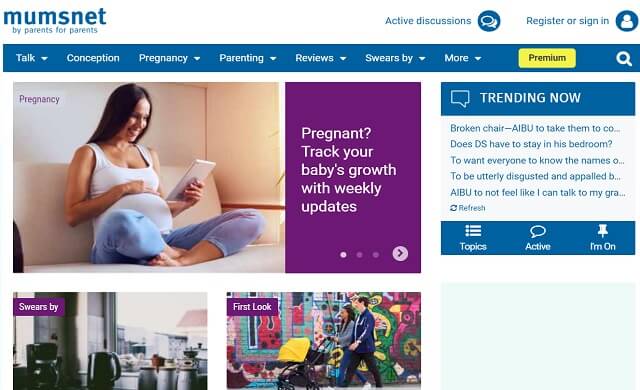 Mumsnet continues to run campaigns, which currently include its call for big companies to ‘Publish Parental Leave’, as well as other activities.

The Mumsnet forum is still going strong, with the Talk section of the site hosting topics on everything from pregnancy and relationships to TV, property, and more. Plus, it’s now also available as an app.

Since Mumsnet started life as a forum, it’s not surprising that the company has continued to create a strong community on social media too. It has 64,000+ Instagram followers, 152,000+ Twitter followers, and a staggering 500,000+ followers on Pinterest.

In fact, it now also runs Mumsnet Influencers, which counts more than 10,000 UK bloggers, vloggers, and social media figures in its network.

Mumsnet’s latest venture is into the world of paid membership systems, with Mumsnet Premium launching this year.

There were, of course, pandemic-related challenges, but coming up to the end of the year, Roberts tells us things are looking good:

“Like all ad-funded online businesses, we had a rough ride in the middle of the year; income from advertising cratered and we had to take some extremely tough decisions. We're on a more even keel now and revenues are starting to pick up again and we're laser-focused on building alternative sources of sustainable revenue that will hopefully see us through the next 20 years.”

“We luckily were able to move pretty seamlessly to home working, as we have always embraced flexibility and an output-based rather than a presenteeism-based culture. So we had already the tools to make remote working viable in place. Things like Slack and Google doc sharing etc. Full-time remote isn’t for everyone and we plan to have a hybrid approach when people are comfortable coming back to the office, requiring teams only to work from the office one or two days a week. Broadly speaking I’d say we’ve seen a rise in productivity from remote working.”

Roberts: “Our mission is to make our users’ lives easier and that hasn’t changed. I want Mumsnet to be the first place parents think of when they need info and advice from people who’ve been there and done that on anything and everything – not just parenting stuff.

“I also want it to continue to be for all mums – not left or right-leaning ones. We pride ourselves on allowing diverse opinions and not being an echo chamber – and our users say they benefit from hearing and seeing other points of view. We purposely don’t just show people things we know they want to see (even though it would probably mean higher engagement and revenues) because we think it ends up in dangerously polarised positions.”